EUGENE, Ore.—April 23, 2014— Following the release of its gold medal-winning Pravda Bohemian-Style Pilsner, Ninkasi Brewing Company announces the release of Lux, a German-Style Helles Lager available throughout all of its distribution areas, May through August.

Commonly known for its big, hoppy Northwest beers, Ninkasi embarked on creating craft lagers in 2011. Since then, the series has highlighted Ninkasi offerings that are Northwest embellishments of traditional lager styles. Brewed with some of the purest water in the Continental United States from Oregon’s own McKenzie River, regionally-sourced hops and traditionally-grown German hops, each beer released under the Prismatic Lager Series remains true to traditional styles and achieves a brilliant balance only accessible by using the highest quality ingredients. In 2014, Ninkasi announced year-round releases to the series, making it a mainstay in its style offerings. 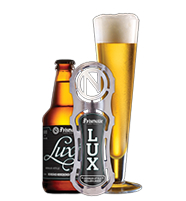 “I have always been a huge fan of European-style lagers,” says Jamie Floyd, founding brewing and co-founder of Ninkasi. “They epitomize balance and nuance as their delicate flavors leave nothing for a brewer to hide behind. We love the challenge these beers present but most of all we love the wonderful beers that follow.”

Known as Bavaria’s national beer, Helles Lagers define drinkability to the people of Munich. Brewed in the traditional German-style, this lager has a lightly-toasted, clean malt profile balanced by the addition of Noble German hops. After brewing, the beer is allowed to lager for eight weeks in Ninkasi’s cellar until it has reached optimal drinkability. The result is a crisp and defined lager that pairs easily with German favorites like brats, pork chops, sauerkraut, potato salad, and spaetzle and is a great companion to summertime activities.

Available for the first time, Lux can be found in 12-ounce bottles and on-draft May through August.

Description: Illuminate your palate with this traditional German-style lager. Brewed with premium pilsner malt and bittered with German Hallertau hops, this Helles lager pours champagne in color. Bright, crisp and satisfying, enliven any occasion with Lux.

Tasting Notes: The lightest of the European lagers, this Munich-style beer was made to counter the bitter pilsners coming from Northern Germany and the Czech Republic. Lux has a clean aroma with just a touch of grassy hops leading to a sweet, toasty malt flavor. This sustains to a crisp finish with just a hint of noble hop aroma. This beer defines refreshing!

Learn more about Ninkasi’s line-up of craft beers at www.NinkasiBrewing.com/beers.