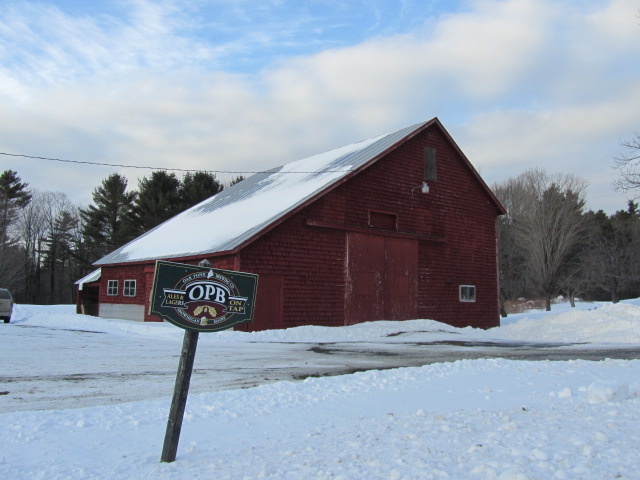 Down an unsuspecting rural road about ten miles from Skowhegan, Maine near the mighty banks of the Kennebec River resides Oak Pond Brewing Company (OPB). Initially founded in 1996 in a converted chicken barn, OPB today offers a distinguishing portfolio of both ales and lagers that is patently a family affair. 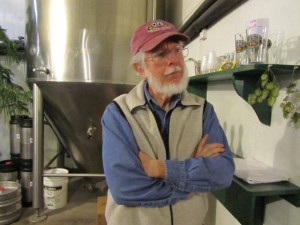 In 2003 co-founder and brewer Don Chandler has taken a purposeful and punctilious approach to his artisan brewing craft. Operating on a 14-barrel brew system acquired from Prince Edward Island, Canada, Chandler along with wife Nancy and son Adam, have arduously labored to fill an alcove for artisan beer in this region of Central Maine. Chandler admits his venture is the result of a point in his life when he was unemployed and unable to find work. OPB’s spotless brewhouse parallels the quality of offerings concocted within its walls. Chandler admits that keeping on top of his laborious operation has been trying and has involved seven years working about 70 hours per week. In 2010, he says, OPB has yielded just over 500 barrels of beer. This consisted of a fairly proportionate of ales and lagers. 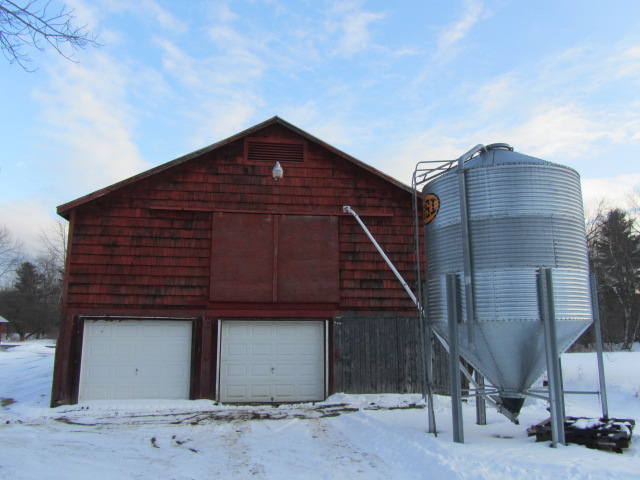 On our visit on New Year’s Eve, OPB featured three ales and three lagers. These included:

DoorYard Ale: This light and crispy session ale offers a smooth clean finish that is a favorite amongst locals who regularly pay visit to the farmhouse for tasters, growler fills, and kegs. A light hopping and a sprucing of wheat malt blend in this mellow brew with a creamy white head. Chandler has bucked the longtime Maine trend of utilizing English Ringwood or Nottingham yeast strains that lend a dry and sometimes butter profile to ales. Instead, he’s decided to employ a more floral and ester-bearing California strain. 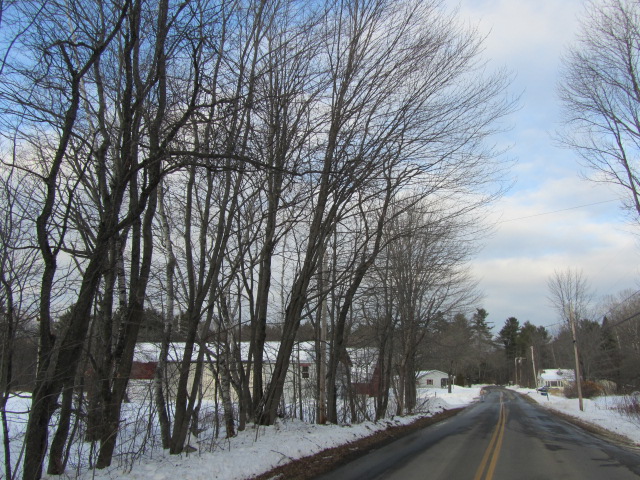 Somerset Lager: Another smooth desirable beer, this bottom-fermented beer provides a serving of dry Pilsner malt freshness in the classic German tradition. The aroma and bitterness are derived from additions of Noble Saaz hops to beautifully complement the malt foundation. Golden in color and with a dense white head, the Somerset showcases the brewer’s attention to detail. 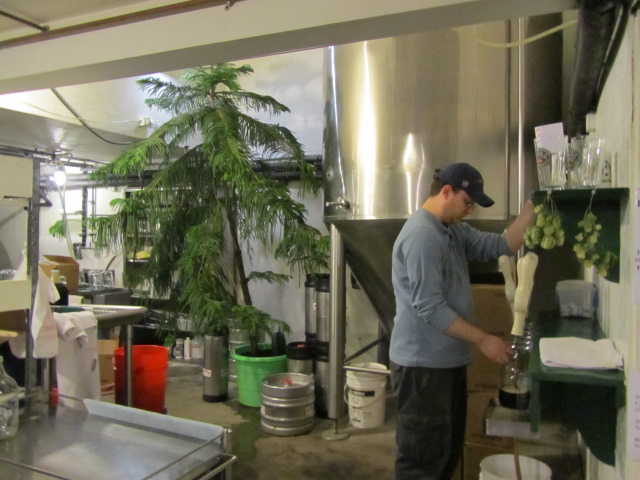 White Fox Ale: A medium-bodied IPA with an approachable spicy hops character, White Fox is far and away the most florally hopped offering at OPB. Perhaps more of an American Pale Ale by West Coast standards, Chandler explains that the rural Maine palate is not as receptive as many of the boldly seasoned IPAs he experienced while at hops school in Yakima, Washington. A wonderful hoppy aroma matriculates the tongue with a humble convivial of piquancy and perfume. 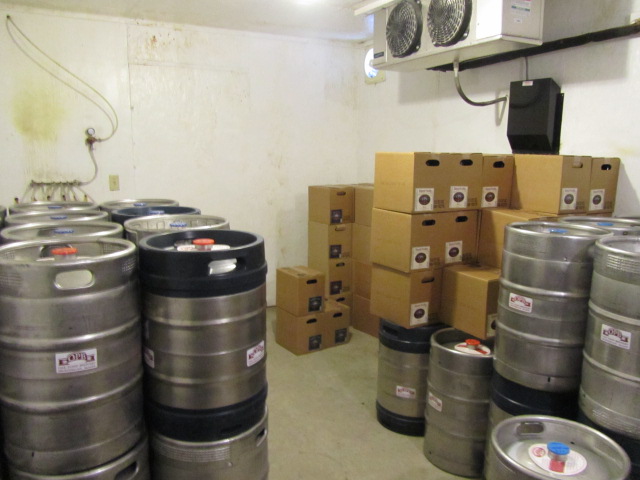 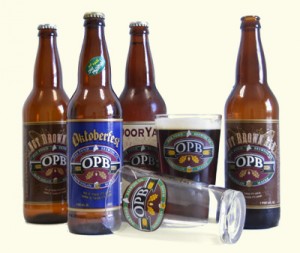 Oktoberfest Lager: Brewed in the tradition of the Bavarian Marzen, this ruby chestnut lager is complex, malty with a well-received caramel character and nuttiness. Hops are used sparingly to provide a superb balance not as forceful as some examples of the style. Despite the name and style, OBP’s Oktoberfest is produced year-round due to popular demand.

Nut Brown Ale: A favorite at OPB, the Nut Brown, was a top pick for me. Chandler says he uses eight different grains in the production of this ale. Undeniable complexity with a slightly toasted charisma alluding to faint coffee-like notes propounds a discrete varying impression upon each sip and as the beer warms slightly. Smooth and creamy on the tongue, Nut Brown is a true English session ale providing both depth and drinkability. This beer was my choice for a growler fill at the conclusion of our sampling experience. 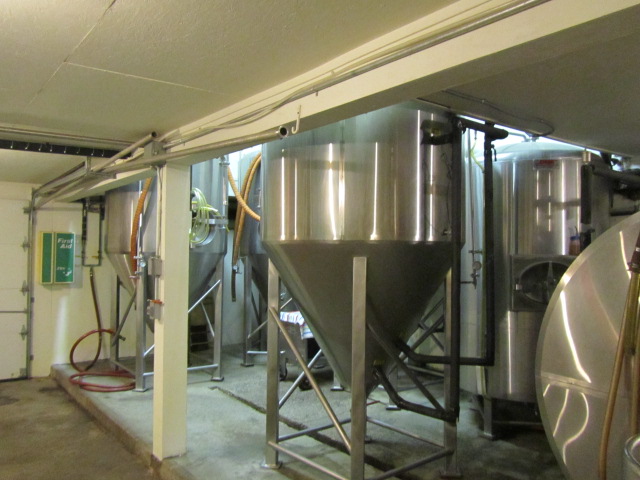 Storyteller Doppelbock: Here is a special seasonal lager from OPB. Brewed with an amalgam of North American and European malts and cold conditioned for about seven weeks, the Storyteller opens the book on a perfect choosing for cold winter weather. Sublimely rich and clean as the day is long, this brew is another impeccable illustration of Chandler’s ability to find a toothsome balance of flavors. 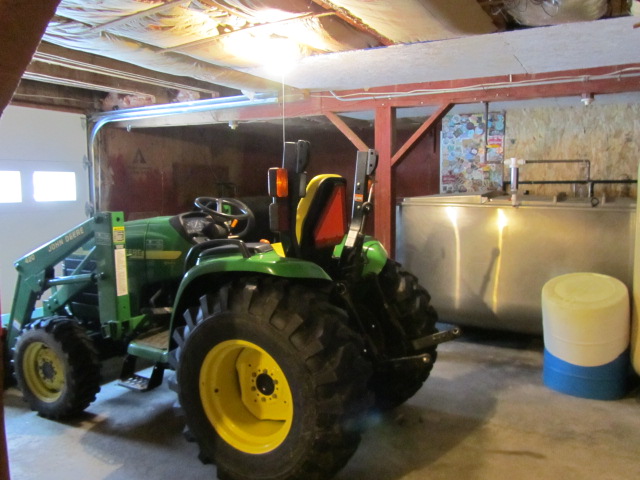 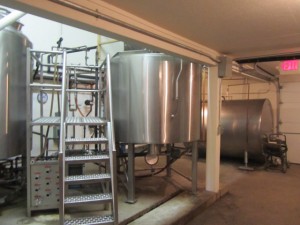 Don Chandler is evidently a hardworking and simple man with a respectable conscientious methodology to his vocation. A growler fill of OBP’s winning works sell for just $5.25 – perhaps the cheapest you’ll find regularly anywhere in this day and age. He says that his community’s “green attitude” is clear and OPB is doing its part to conserve energy and encourage the return of a dedicated customer base. Oak Pond self-distributes their wares to a roughly 50 mile radius from the brewery (Chandler says there are a few outlier accounts but for the most part, OPB’s beer is a truly regional phenomenon). Off a snowy wooded road and by the tranquil body of water, both for which Oak Pond takes its name, the Chandlers have indubitably carved out their place in the hearts of those joining them in the modern craft beer revolution. To be honest, I entered with a slight air of skepticism. How good could a secluded Skowhegan brewery be. Well, the answer is quite good. I recommend you experience it for yourself if ever in the vastness of the deep Central Maine coppices. Cheers!