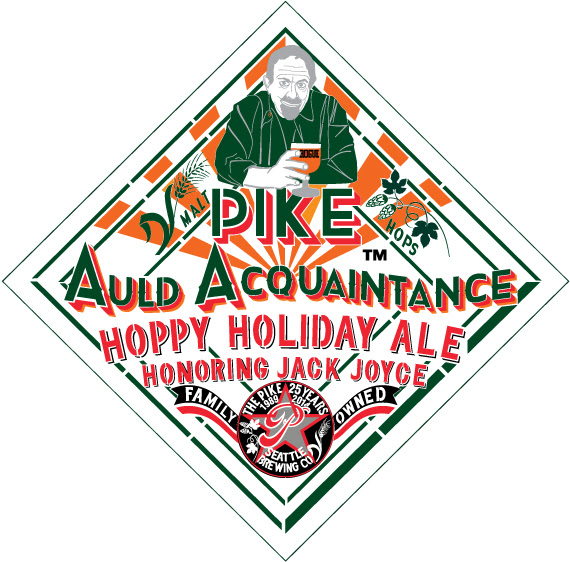 Seattle, Washington, November 17, 2014 – The Pike Brewery, celebrating 25 years, announces the release of Pike Auld Acquaintance Holiday Ale 2014.  Founded in 1989, the brewery introduced their annual holiday offering in 1990 and has brewed it for ‘auld’ and new friends alike, ever since. It was an early entry into the ‘Winter Seasonal’ craft beer category.

For the first twenty-three years of production, Jolly Ol’ Saint Nick has adorned the label. Perhaps the designer and Pike owner, Charles Finkel, was inspired by the Santa Claus role he’s played every Christmas Eve for the last 38 years, visiting neighborhood children (along with ‘Mrs. Claus,’ Rose Ann Finkel) as a benefit for Seattle Children’s Hospital. Parents leave gifts hidden outside for the chubby fellow to deliver to their kids. And Kris Kringle never forgets the adults, of course; Santa and the Mrs. always leave a bottle or two of Pike Auld Acquaintance.

To honor his old acquaintance, Jack Joyce of Rogue Ales, who passed away earlier this year, Finkel redesigned the label to feature Joyce, who, just like Santa, is toasting with a beer for the 2014 vintage

Joyce, a former Nike Executive,  built Rogue into one of America’s most successful and award-winning breweries, not by following others, but by staking his own claim, that of a genuine rogue. Rogue Ales are now distributed internationally. The company operates a group of brew pubs, grows their own barley and hops, and distills their own rum and whiskey.