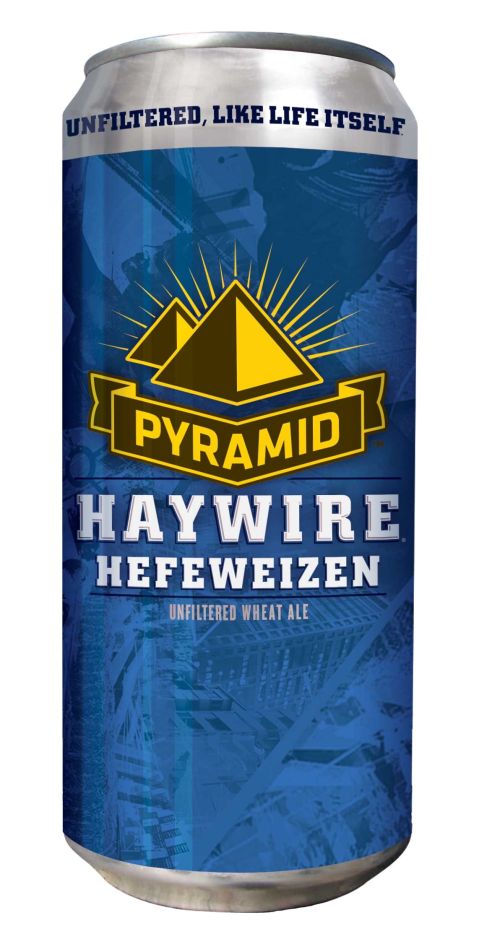 SEATTLE, WA – April 27, 2010 – The standard by which all other wheat beers are judged is making an informal summer tour beyond the tap and bottle. Pyramid Breweries introduces its gold medal Haywire Hefeweizen in a limited-release 16oz can. Available from May – July, the new package offering presents a tower of refreshing wheat ale that’s sized for a thirsty time of year. Versatile and easy to chill, the new Haywire can is perfect for warm weather adventures and gatherings where glass need not tread.

“A beer this good deserves to go anywhere,” said Mike Brown, Commissioner of Inspiration and Aspiration for Pyramid Breweries. “Backcountry camping, paddling trips, music festivals, golf courses. Haywire in a can is ideal for all the places Pyramid drinkers celebrate summer’s best in the company of great friends and great beer.”

Haywire is a deliciously deranged American-Style Hefeweizen and an award-winning take on the Bavarian classic. This refreshingly unfiltered wheat ale delivers a distinctively smooth flavor worth sharing with friends. At the 2009 Great American Beer Festival – the largest national beer competition recognizing the most outstanding beers produced in the United States today – Pyramid’s Haywire Hefeweizen was awarded the gold medal for best American-Style Wheat Beer with Yeast.

The 16oz Haywire is a tall can for a short season, and can be found exclusively in the Seattle and Southern California markets. Joining the vast line-up of ways to enjoy Haywire – on draft, in 12oz bottles (available in 6-packs, 12-packs, and in all Pyramid Variety packs) and 22oz bottles – Haywire cans will be available for sale in 4-packs at major retailers.