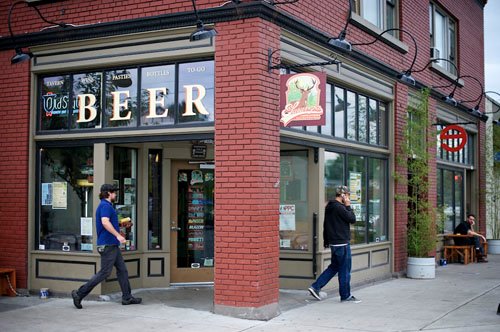 A standout series included in the “Vintage Ale Charity Sale” is the first seven beers from The Bruery’s 12 Days of Christmas, a retired winter seasonal ale series. Started in 2008, The Bruery releases one beer every winter that is retired by spring, making these beers extremely rare. Seven beers have been released so far, including the just-released Seven Swans-a-Swimming, a Belgian Quadrupel style beer. Also included in the series is Six Geese-a-Laying, a classic dark and toasty winter ale that followed 5 Golden Rings, the only golden ale in the bunch. Four Calling Birds is a spiced strong dark ale and Three French Hens is a bold and spicy Belgian Dark Strong Ale aged in oak barrels. Two Turtle Doves is somewhere between a Belgian-style Dark Strong Ale and an Imperial Porter, and the first release, A Partridge in a Pear Tree was brewed in the style of a Belgian-style Dark Strong Ale, brewed with housemade dark candi sugar, Munich and Vienna malts.

The “Vintage Ale Charity Sale” also includes several verticals from four world-renowned breweries. A vertical beer tasting is when you taste the same type of beer from one brewery that was bottled in different years. The vertical collections include, Apricot by Cascade, a sour beer aged in French oak barrels with ripened apricots, La Folie from New Belgium, The Abyss from Deschutes, and San Diego-based Firestone Walker’s Anniversary barrel aged blends. Over the course of the month the price will drop for each series and varietals offered, but there are a limited number available of each option.

The vintage beer program at Saraveza is curated by owner and self-proclaimed beer geek Sarah Pederson and her staff, and the program includes over 45 different beers from 20 breweries located all over the world. The collection includes a strong focus on Oregon and California breweries with highlights from Colorado and breweries abroad. Like wine, beer has the ability to evolve and develop complex new aromas and flavors with age. Aged beers will develop new characteristics – some become richer and more developed as the strong hoppy notes fade, and others might ripen with new layers of fruit or tartness. The “Vintage Ale Charity Sale” starts on December 1st and ends at 12:00 pm (PST) on December 23rd (or until supplies last) at Saraveza’s online shop: www.beerboutique.com. Beer will be available for pick-up at Saraveza, and will be held up to three months after purchase to accommodate out of state buyers. Pricing and sale date information is included below.

About Saraveza:
Saraveza Bottle Shop & Pasty Tavern in Portland, Oregon is a beer bottle shop serving a slice of Midwestern hospitality and food for the Portland community. Named as one of America’s 100 Best Beer Bars by Draft Magazine for the past four years and one of The 8 Best Craft Beer Bars in All of Portland by Thrillist, Saraveza believes in “thinking while you drink.” The local watering hole and craft beer convenience store proudly features a handpicked selection of the best craft beers in a selection of over 250 bottles and 10 rotating taps. In addition to a knockout lineup of craft beers, Chef Matthew Simons and Baker Lori Adams Clinton are well known for serving classic, hearty Midwest tavern fare such as handmade pasties from scratch, house-cured meats, and more. For more information please call 503-206-4252, visit Saraveza online, on Twitter and on Facebook.