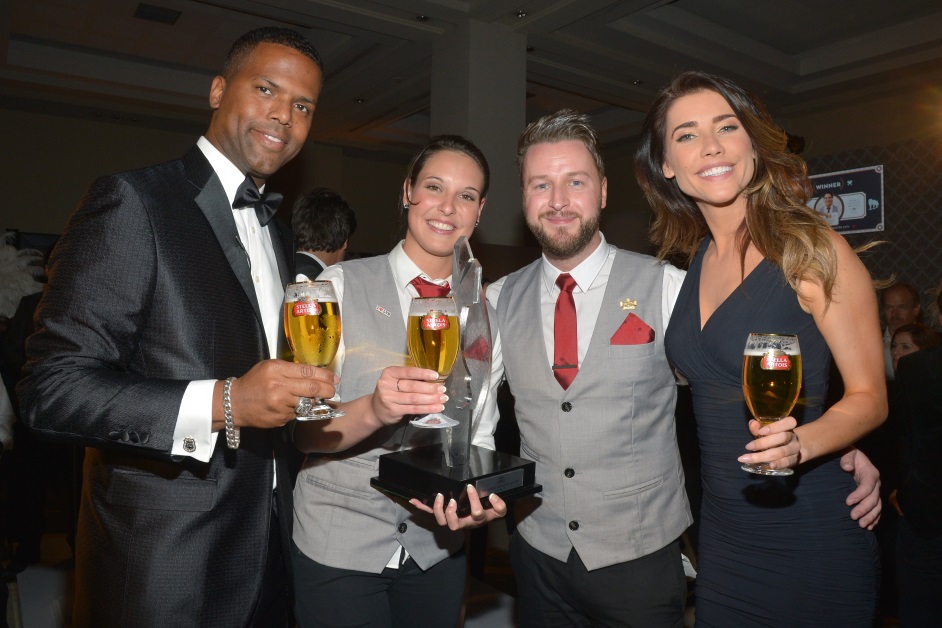 Leuven, Belgium – May 20, 2014 – Stella Artois, the world’s best-selling Belgian beer, today announced that Marjolein Geuens, of Belgium, has won the 2014 Stella Artois World Draught Master title in an international competition to determine the highest level of excellence in executing the brand’s exacting 9-Step Pouring Ritual.  Geuens defeated Nick Kirman, of the United Kingdom, in a finale that pitted two of the world’s fastest, most artistic competitors in a head-to-head match.

In her capacity as World Draught Master, Marjolein will serve as an official brand ambassador for Stella Artois worldwide. She will partner with Stella Artois to demonstrate the passion and craft behind the perfect pour.

Marjolein was named winner by a panel of expert judges, including outgoing Stella Artois World Draught Master Allaine Schaiko and Stella Artois global brewmaster Paul van de Walle.  The panel agreed that Marjolein bested an exceptional field of competitors by demonstrating an exceptional level of artistry. The 9-Step Pour requires a mastery of several skills and an ability to execute them in head-to-head competition in front of a sizable crowd and a stern judging panel.

“In the end, Marjolein demonstrated the craft and execution that define a World Draught Masters champion,” said Debora Koyama, Global Vice President, Stella Artois. “The perfect pour is an expression of respect, both for the customer and the beer. It takes a high level of artistry to master the 9-Step Pour and to deliver it in front of the world. We are thrilled to welcome Marjolein to the Stella Artois family.”

The 2014 World Draught Master Competition was held on Saturday, May 17, at the Grand Hyatt Cannes Hôtel Martinez. The event took place during the Cannes Film Festival, of which Stella Artois is a longtime partner. Television host AJ Calloway and actress Jacqueline Wood hosted.

The World Draught Masters championship is a celebration of the artistry in beer-pouring perfection just as the Cannes Film Festival celebrates artistry in cinema.  Belgian beers are traditionally served in unique glasses that accentuate each beer’s flavor profile. For Stella Artois, that glass is the Chalice. The classic 9-Step pouring ritual makes use of the Chalice’s curves, stem and signature gold rim, yielding the optimal drinking experience for Stella Artois fans.

The Belgian 9-Step Pouring Ritual is a rhythmic, complex series of steps. They include:

1.       The Purification – The Chalice is cleaned and rinsed

2.       The Sacrifice – The tap is opened in a single swift motion and the first drops of beer are poured

4.       The Crown –  Lowering the Chalice permits the natural formation of a foam head

6.       The Beheading – When the head foams up and threatens to overflow, a head cutter is deployed to smooth it gently

7.       The Judgment – The perfect amount of foam equals two fingers

8.       The Cleansing – The bottom and sides of the Chalice are to be cleaned

9.       The Bestowal – The beer should be presented on a clean coaster with the cartouche facing outward

The Cannes Film Festival is a critical element in a larger campaign undertaken by the brand. Dubbed “World’s Greatest Events,” the campaign focuses on the people whose relentless pursuit of flawlessness lifts everyday events up to a superior level. “World’s Greatest Events” will celebrate the artistry and perfection at events in the United Kingdom, France, Argentina and the United States. Fans from around the world are welcome to join the conversation socially via the #herestoperfection hashtag.

About Stella Artois
Stella Artois® is part of a Belgian brewing tradition dating back to 1366. It is the No. 1 Belgian beer in the world and is present in over 80 countries. Stella Artois® is a bottom filtered, blonde pilsner. It is thirst quenching with a malty middle and crisp finish delivering a full flavor and a hint of bitterness. Stella Artois® is best enjoyed served between 3 and 5 degree Celsius and should be served in the unique Stella Artois® Chalice according to the 9-Step Pouring Ritual to guarantee a perfect experience of this gold standard lager.  Visitwww.stellaartois.com for more information.