Arriving on store shelves any day now is the first beer from Koochenvagner’s Brewing Co., aka Stone Brewing Co. Yes Stone Brewing officially launched another line of beers under a brand new name without any mention of this beer being from their flagship brewery. Yes, kind of crafty in our book. “Stochastic” is defined as involving a random variable, just as this new line of beers is being marketed. This being said, we do look forward to trying beers from this new “brewery”.

Here are more details from Stone’s elaborate and self indulging press release:

(February 10, 2014)—This is the first official transmission from the headquarters of the Stochasticity Project, a first-of-its-kind, broad-scale experiment exploring the limits of imagination and the concept of randomness through the craft of brewing. On February 10, the first beer to be developed via the Stochasticity Project will arrive on store shelves throughout the United States. The inaugural beer from the project, Grapefruit Slam IPA, is a big-bodied, yet refreshing India pale ale marrying hand-zested grapefruit peel with the inherent citrusy bitterness of Centennial hops from the fertile bines of Washington state. A one-time offering available on draft and in 22-ounce bottles, Stochasticity Project Grapefruit Slam IPA ushers in what, according to years of studies and supporting data, will be the next enthralling chapter in the history of American craft brewing.

Dry, earthily bitter and packed with the character of sun-kissed fruit, Stochasticity Project Grapefruit Slam IPA seems natural in its cohesive perfection, but it is a beer birthed from iterations both numerous and varied. Though new to the world at large, the fermentation engineers at the helm of the Stochasticity Project’s brewing laboratory and research facility have been at work for years, testing ale and lager recipes, calling on centuries-old techniques and implementing modern processes. These recipes will satisfy palates of nth degree beer nerds searching for the ultimate in flavors and innovations from the craft brewing revolution. 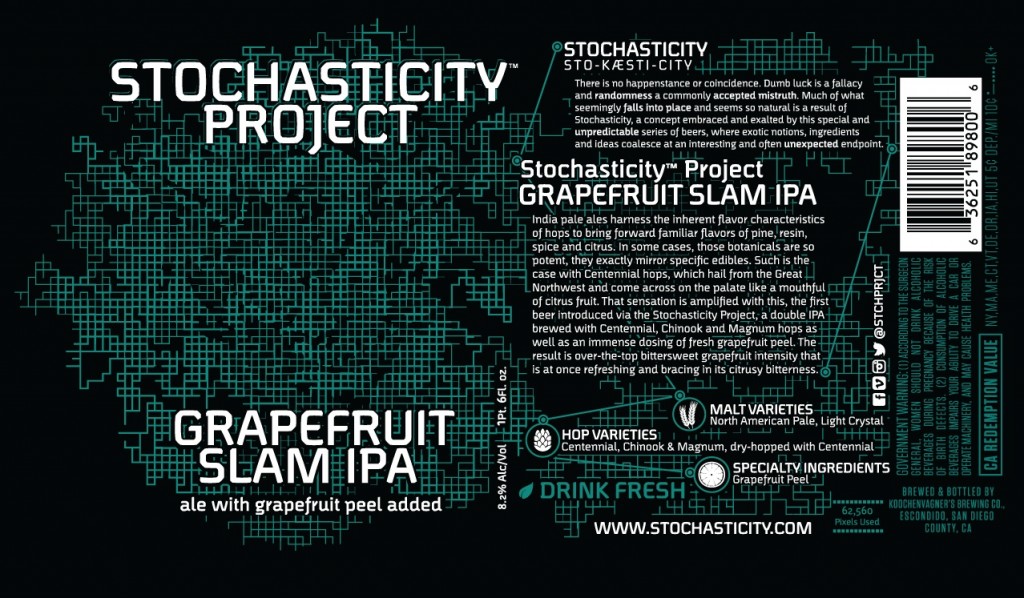 Wide-ranging information on Stochasticity Project Grapefruit Slam IPA and several beers which will be released in its wake can be found at www.stochasticity.com. Casual beer imbibers should be forewarned that this is not a forum for passive enthusiasts. What awaits at the Stochasticity Project’s official site is an exploration behind the science of beer, and cutting edge theories and ideas governing the direction of this ongoing program. A visit, no matter how brief, is certain to expand one’s knowledge and understanding of the brewing process, rendering it impossible to see beer the same way ever again. But that is one of the many, big-picture, big-reward ambitions of the Stochasticity Project. This ambitious undertaking starts today with the release of Grapefruit Slam IPA, descending on this nation like a lupulin-laced, banner-hoisting standard bearer for the new age of craft beer.

About the Stochasticity Project:
There is no happenstance or coincidence. Dumb luck is a fallacy and randomness a commonly accepted mistruth. Much of what seemingly falls into place and seems so natural is a result of Stochasticity, a concept embraced and exalted by this special and unpredictable series of beers, where exotic notions, ingredients and ideas coalesce at an interesting and often unexpected endpoint. To keep up with the latest developments in this unique and noble experiment, follow The Stochasticity Project on social media via Facebook(StochasticityProject), Twitter (@StchPrjct) and Instagram (@StochasticityProject). 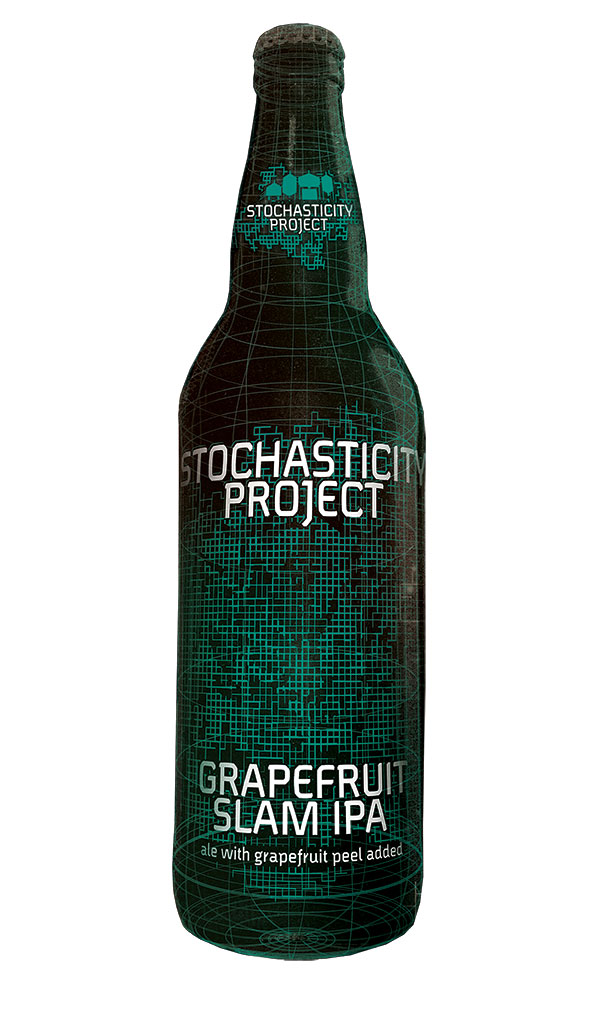 Tasting Notes:
The essential oils and the monoterpenoids like geraniol and citronellol that are found in hops often provide aromatic components that are described in professional sensory panels as “citrusy” and are reminiscent of the flavors of grapefruit, lemon, or lime. For that reason, the potential synergy of specific hop varieties with citrus fruit is something that brewers who research unique ingredients, and who focus on combining the brewing art with brewing science have been experimenting with for a while. This particular beer combines the lemony and piney aspects of the Centennial hop, with the intensity provided by dry-grapefruit peel, added as a dry-hop along with the hops.

The brew is converted in the brewhouse using a temperature rest profile designed to accentuate dryness and fermentability. The resulting Real Degree of Fermentation is high, the attenuation limit is low, the residual dextrin content is low, and the dryness helps accentuate the hop flavors that emerge from the glass.

The end result is an intensely citrusy brew, aromatics at the first turn of Centennial hops, with subsequent evaluations resulting in an ever increasing grapefruit presence. The bitterness provided by the hops, well over 90 IBUs, or International Bitterness Units adds a large component of bitterness that blends exceptionally well with the light pithy character of the grapefruit. A remarkably refreshing beer.