ESCONDIDO, CA (Jan. 12, 2015) – At Stone Brewing Co., collaboration beers are looked at as an opportunity to get creative, experiment well beyond day-to-day brewing parameters, and utilize unique techniques and ingredients—all while celebrating the spirit of craft beer camaraderie. These beers are rarely brewed again, but in a gesture to outspoken and engaged craft beer fans, Stone is revisiting a particular collaboration that was first brewed in 2011 with Guam’s Ishii Brewing Co. and Japan-based Baird Brewing Company. Baird / Ishii / Stone Japanese Green Tea IPA is brewed with Japanese sencha green tea and five different hops, including Sorachi Ace, a varietal originally developed in Japan. Starting today, the IPA will begin arriving in 22-ounce bottles and on draft at restaurants, bars and retail outlets in markets where Stone beer is sold. 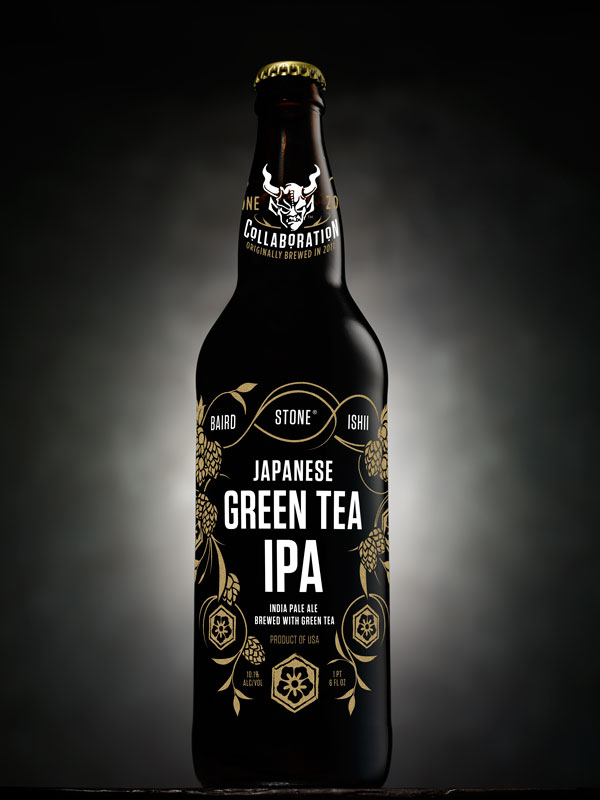 After the 2011 Japanese earthquake and tsunami, Toshi Ishii, the owner of Ishii Brewing Co. and a former Stone Brew Crew intern, contacted Stone CEO and Co-founder Greg Koch to propose collaborating on a beer that would raise funds for recovery efforts (a total of $64,000 was donated to the Japanese Red Cross Society as a result of the project). Koch discussed the collaboration with Stone President and Co-founder Steve Wagner and Stone Brewmaster Mitch Steele, and suggested Bryan Baird of Baird Brewing Company as the third collaborator, since he had met and visited Baird’s brewery in Japan a few years earlier. Steele, Ishii and Baird decided to harness the Japanese food culture’s affinity for tea by brewing an IPA that would feature green tea from Japan.

“This beer was beloved when it was first released, but due to the hop availabilities and creative nature of collaborations, we decided to swap out the original beer’s now very rare Pacifica hops from New Zealand for Helga hops from Australia,” explains Steele. “We brewed exactly the same recipe, targeting the same original gravity; however, since we’ve improved our brewing and fermentation processes, the alcohol by volume rose from 9.2 percent to 10.1 percent. The result is a heftier beer that perfectly highlights the earthy spice flavors that the Japanese green tea provides.”

The beer has a massive hop presence, both in flavor and bitterness. It was dry-hopped twice, first with Aramis, Crystal and Helga, all of which contribute spice notes and the aromas and flavors of mango and pineapple. The second dry hop consisted of Sorachi Ace hops and the Japanese green tea addition. Sorachi Ace provides lemon and dill flavors, while the tea provides dry, herbal and, understandably, rich green tea notes. With a mild barley character thanks to the exclusive use of pale malt, the brewers were able to highlight a hop profile that’s harmoniously paired with distinct green tea qualities.

To fully enjoy the seamless marrying of hop and green tea flavors, Baird / Ishii / Stone Japanese Green Tea IPA should be enjoyed as far ahead of the beer’s “enjoy by” date (stamped on the bottle neck) as possible. Those who savor the bright, herbaceous and bitingly hoppy IPA will understand why this crowd pleaser was revived for a second go-round.

Tasting notes, provided by Stone Brewmaster Mitch Steele
Appearance: Pours a deep gold with a cream-colored head.
Aroma: A complex blend of herbal tea and hops; elements from both ingredients are there. The up-front aroma is mostly green tea, and there are also strong elements of peach, apricot and mango from the hops.
Taste: There is a massive hop presence in both the flavor and bitterness. The hops start off as tropical fruits like mango and pineapple, and then are followed by hints of dill from the Sorachi Ace. The tea flavors assert themselves mid-palate and linger nicely with a dry character.
Palate: Light, dry and very bitter finish.
Overall: Bryan Baird of Baird Brewing Company, Toshi Ishii of Ishii Brewing Co., and I selected hop varieties for this beer that would blend well with Japanese sencha green tea, and I think we succeeded. Heavy doses of Crystal and Australian Helga hops, accompanied by the Aramis variety from France, provide a wonderful, spicy, and fruity hop character that blends exceptionally well with the herbal and grassy sencha tea flavors. The very late addition of Japanese Sorachi Ace hops provides hints of citrus and dill. Aside from switching out the Pacifica hops for Helga hops, we kept the recipe the same. The ABV on this re-brew is slightly higher than the 2011 release because of the annual changes in malt enzyme strength and variability with the yeast. This was one of our team’s all-time favorite Stone collaboration brews and we are thrilled to be brewing it again.