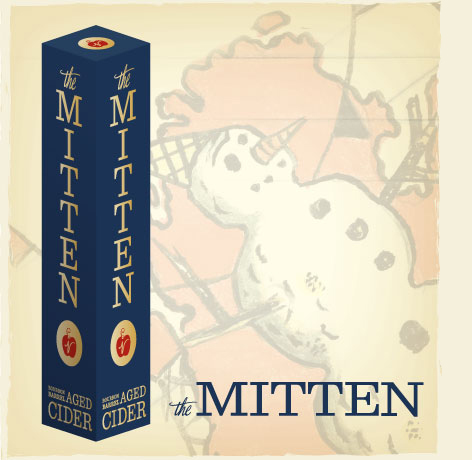 CHICAGO (Jan. 7, 2014) — Virtue Cider has released a 2013 vintage of its popular winter cider, The Mitten. A blend of last season’s best Michigan apples, The Mitten is aged for several months in bourbon barrels, then finished with juice from the prolific 2013 apple harvest. The resulting cider offers notes of vanilla, caramel, and charred American oak, balanced with the best of the orchard—over-ripe apples and their sweet, tart, earthy juice.

This is the second draft release of The Mitten and its first bottle release outside of Virtue’s Fennville, Mich. tasting room and bottle shop.

“We’ve waited very patiently to release our second vintage of The Mitten,” says Virtue Cider founder Gregory Hall. “It’s our toast to the comforts of winter, rich and full of oaky bourbon barrel notes. It was a sad day at Virtue when we ran out of last year’s Mitten, but the beauty of this cider rests in extensive barrel aging, and it’s worth the wait!”

The Mitten 2013 vintage enters the craft cider market already a recipient of the Gold Medal Award for Cider at the 2013 Festival of Barrel Aged Beer. It is one of six traditional farmhouse blends Virtue Cider ages in one of the largest barrel programs in North American cider.

The Mitten will be offered on draft and in 750ml bottles in all markets where Virtue is currently distributed, including the company’s home state of Michigan, plus Chicago, Kentucky, Los Angeles, New York City, Ohio, Portland, Ore.; San Francisco, and Washington state. It’s also available for order online.

About Virtue Cider
Virtue is the hard cider venture launched in June 2011 by Gregory Hall, former brewmaster at Goose Island, and co-founder Stephen Schmakel. The company’s mission is to make European-style ciders from fresh heirloom apples—never from concentrate—and employ traditional farmhouse production methods that include native and secondary fermentation, use of wild yeasts, and an expansive barrel-aging program. For more information about Virtue Cider, head to www.virtuecider.com and find them on Facebook and Twitter.