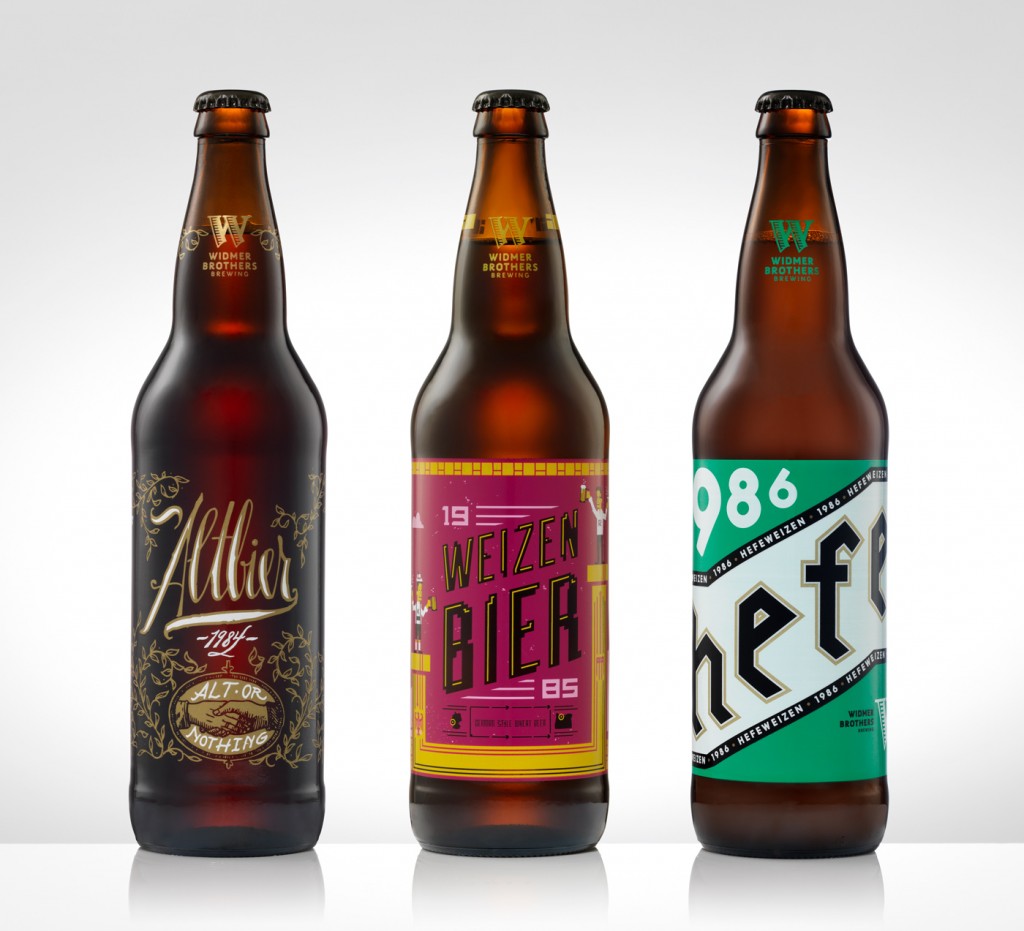 There’s been a lot of buzz happening as of late regarding Widmer Brothers Brewing’s 30th Anniversary. Today back on April 2, 1984, Kurt and Rob Widmer incorporated their business, Widmer Brewing Company, and started cobbling together their brewhouse on NW Lovejoy in Portland, Oregon. Now long gone, their brewhouse sits in North Portland with a re-opening of their remodeled pub taking place tomorrow, April 3rd.

To help ring in these first 30 years, Widmer has launched the first three beers in the 30 Beers for 30 Years Series. The first three releases will be Altbier for 1984, Weizenbier for 1985, and Hefeweizen for 1986 in great new looking labels in limited edition bottles. And now Widmer has an interactive website that gives a rundown on the 30 Beers for 30 Years Series and the label artists: www.30Beersfor30Years.com.

PORTLAND, Ore. – April 2, 2014 – On this day 30 years ago, brothers Kurt and Rob Widmer founded Widmer Brewing Company in Portland, Oregon. In 1984, the two brothers began cobbling together their first brewery on NW Lovejoy using a mismatched variety of reclaimed equipment, including retired dairy tanks and vessels initially intended for use in a nuclear power plant that was never built. Though they didn’t know it at the time, opening their small, hand-built brewery would help shape craft brewing history.

The three beers each hold a huge place in Widmer Brothers’ history. Altbier was the first beer brewed and sold by Widmer Brewing Company. While development of the beer began in 1984, Altbier wasn’t actually released to the public until 1985 after the brothers brewed and dumped the first twelve batches. It’s a testament to Kurt and Rob’s commitment to quality; they wanted the beer to be just right, a value that’s evident in every Widmer Brothers beer and one that has helped drive the brewery’s success since the beginning.

As Kurt and Rob recall, to the beer drinking public in the mid-80s, there were essentially two styles of beer: dark- and light-colored beers. At the time, Altbier was considered too bold, too hoppy and too dark by some, so Kurt and Rob decided that they needed a lighter beer to both satisfy consumer demand and help grow the brewery. With an eye toward their German heritage, in 1985, they decided to start brewing a filtered wheat beer, Weizenbier.

The two brothers sold Altbier and Weizenbier exclusively until 1986 when the late owner of The Dublin Pub, Carl Simpson, asked if they would brew a third beer. Since they had limited resources and space, the request put Kurt and Rob in a tough position. To meet the request, they improvised, took an innovative approach and decided to leave a portion of their Weizenbier unfiltered and sell it as a Hefeweizen. Thus The Original American Hefeweizen was born, creating a completely new beer style that would become the brewery’s flagship and reshape the craft beer landscape. The rest is history.

“Looking back at these three releases puts our early days and growth of Widmer Brothers Brewing since then in perspective,” said Rob Widmer. “Like many young entrepreneurs, we were flying by the seat of our pants, and it’s truly surreal to revisit that time in our lives when Altbier, Weizenbier, and Hefeweizen were our only three offerings. I suppose it’s an understatement to say we’ve come a long way.”

Each re-release in the 30 Beers for 30 Years series is brewed in small batches to original specifications from archived recipes drawn up on notebook paper in the 80s. While Kurt and Rob were meticulous about keeping records, they didn’t necessarily take the most detailed notes.

“For these initial few releases, we were literally working from pieces of notebook paper, cross-referencing notes from various brews to figure out exactly how Kurt and Rob were brewing these beers 30 years ago,” said Ben Dobler, Widmer Brothers innovation brewer, who helped spearhead the series. “It’s a real challenge to replicate the recipes perfectly, especially when we consider the imperfections that likely made these beers great at the time. But we’re working hard to maintain the original character, intent and quality of these beers, which were extraordinary for their time.”

ABOUT THE BEERS:
1984 Altbier
Drawing inspiration from traditional German beers, Altbier was the first beer Kurt and Rob brewed when they opened Widmer Brewing Company. Often described as “ahead of its time,” Altbier was named The Oregonian’s “Beer of the Year” in 1985 by celebrated beer writer, Fred Eckhardt. The beer is still brewed in small batches and is a favorite at the Widmer Brothers pub. 5.0% ABV, 35 IBU

1986 Hefeweizen
When Portland’s Dublin Pub asked for a third beer offering from the Widmer Brothers (at the time, they were only brewing two styles) Kurt and Rob didn’t have the capacity to brew another new beer, so they improvised. Leaving a portion of Weizenbier unfiltered, they were able to offer a third beer, and Widmer Brothers Hefeweizen was born. 4.9% ABV, 30 IBU

LABELS:
Each release in the 30 Beers for 30 Years Series features label artwork by Portland-based artists. Keegan Wenkman of KeeganMeegan, Tim Weakland of Sincerely Truman, and Aaron Rayburn of AC Rayburn, created the Altbier, Weizenbier, and Hefeweizen labels, respectively. To see all three labels and to find out more information on the artists, please visit www.30beersfor30years.com.

AVAILABILITY:
The 30 Beers for 30 Years beers are available in extremely limited quantities. Thirty cases of each release, packaged in 22-ounce bottles, will be available only in the Portland market. Limited draught beer will be available in select markets. Interested fans will be able to try all three original versions on Thursday, April 3, at the newly remodeled Widmer Brothers Pub. In addition to releasing these three beers on Thursday, the brewery is unveiling the recent pub remodel at a public Grand Re-Opening Party. For more information, please visit www.widmerbrothers.com.