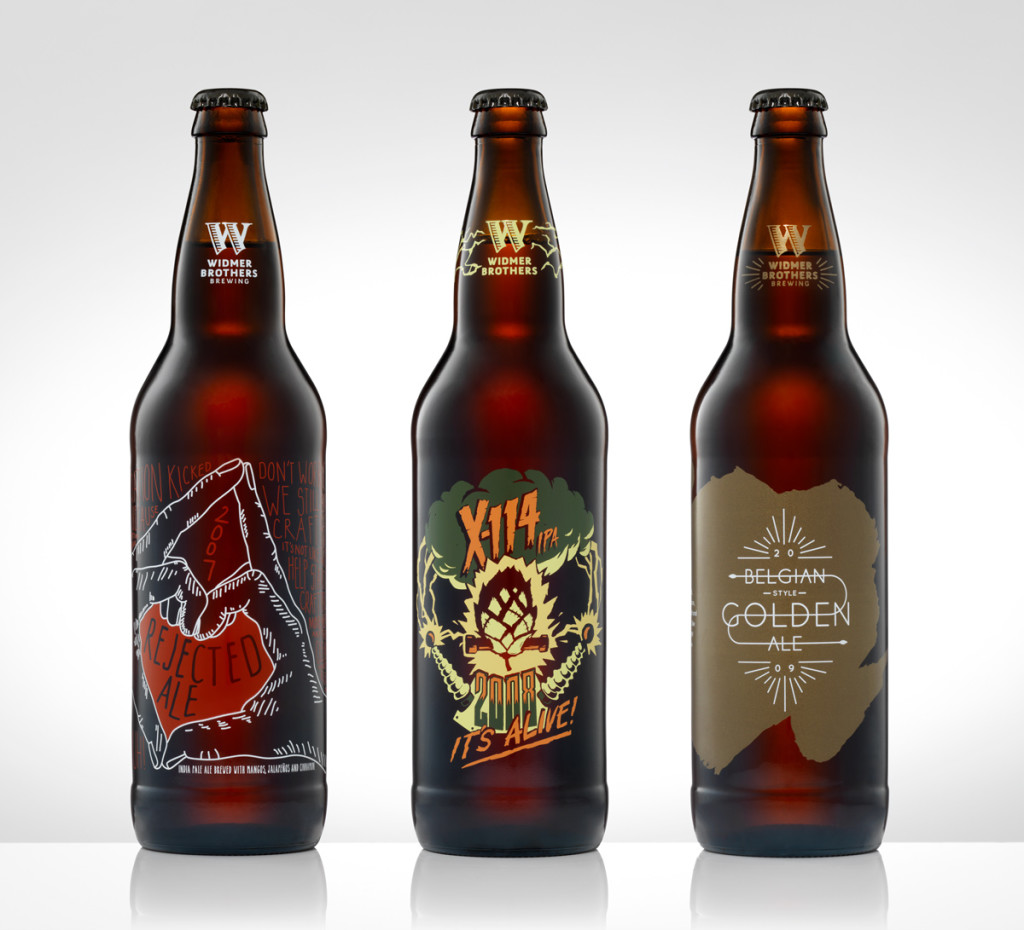 PORTLAND, Ore. – January 12, 2015 – The start of the New Year means that only seven beers remain in Widmer Brothers Brewing’s 30 Beers for 30 Years Series, as the brewery continues its 30th anniversary celebration in the last months of its 30th year in business. Widmer Brothers announced three beers today in the unprecedented series: Rejected Ale, X-114, and Belgian Golden Ale.

Like all of the beers in the series, today’s three releases hold a special importance to the brewery. Rejected Ale is unique to the entire series, as it is the only beer to date that is not from Widmer Brothers’ 30-year recipe archive.

Rejected Ale is an homage to 2007, the year Widmer Brothers was unceremoniously kicked out of the Brewers Association. This unfiltered IPA is brewed with cinnamon and mango, infused with 15 pounds of jalapenos, and dry hopped with copious amounts of Mosaic, Centennial, Chinook, and Cascade hops.

“We brewed Rejected Ale to reflect our opinions about the Brewers Association’s definition of ‘craft’ and the decision in 2007 to no longer consider Widmer Brothers a craft brewery,” said Kurt Widmer, co-founder of Widmer Brothers Brewing. “We aren’t bitter about it, but wanted to commemorate the moment in our history with a new beer in the 30 Beers for 30 Years Series. We had a little fun with the label art and beer, making a refreshing, fruit-forward IPA with a sweet burn.”

The beer representing the year 2008 in the series is X-114 IPA, which is a fan favorite that originally appeared in Widmer Brothers’ now-retired Rotator IPA Series. At the time of its initial release, Widmer Brothers’ brewers were often brewing with experimental hops because of the brewery’s longstanding relationships with and access to the Northwest’s premier hop growers.

The experimental hop known as X-114, a brewer favorite, ended up being named Citra, which is now an extremely popular hop variety among brewers looking for pronounced tropical fruit and citrus aromas and flavors. X-114 IPA is loaded with Citra hops and is being revived for the 30 Beers for 30 Years Series.

All three beers will be available throughout January in the Portland area only. Like all beers in the 30 Beers for 30 Years Series, an extremely limited quantity of each beer was brewed and packaged with custom labels for sale in 22-ounce bottles and on draught.

To see the labels and learn more about the artists and the project, please visit www.30beersfor30years.com.

About the Beers
Rejected IPA – 2007
Rejected Ale is an homage to the year Widmer Brothers was unceremoniously kicked out of the Brewers Association. This unfiltered IPA reflects Kurt and Rob’s fiery (and sweet) opinions on the matter. Rejected Ale is brewed with cinnamon and mango, infused with 15 pounds of jalapenos, and dry hopped with copious amounts of Mosaic, Centennial, Chinook, and Cascades. Call it a refreshing IPA or a sweet burn, just don’t call it “crafty.” 7% ABV

X-114 IPA – 2008
Because of our long-standing history with the Northwest’s premier hop growers, we have access to experimental hops that are being created. Sometimes these growers send us some to play around with and report back to them how they perform. Enter X-114 IPA. Using what would come to be known as the Citra hop, this extremely aromatic and highly drinkable IPA launched our popular Rotator IPA Series. 6% ABV

Belgian Golden Ale – 2009
Our first large-scale Belgian style beer. As Belgian beers began to gain popularity, W’09 Belgian Golden Ale would be looked at as ahead of its time. Let’s see what happens when we bring it back! 6.5% ABV