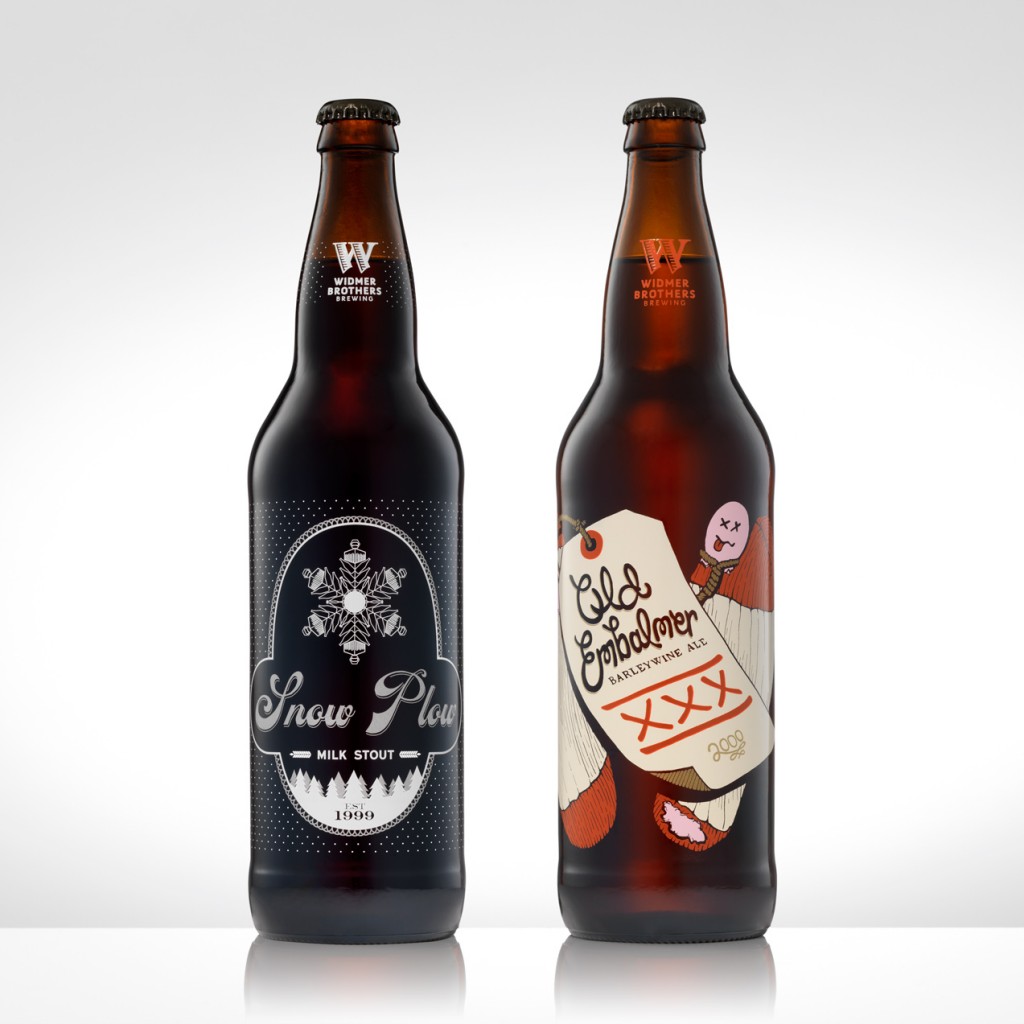 PORTLAND, Ore. – September 29, 2014 – Widmer Brothers Brewing today announced the re-release of Snow Plow Milk Stout and Old Embalmer Barleywine in its 30 Beers for 30 Years Series. Snow Plow and Old Embalmer are available in 22-ounce bottles and on draught starting today in the Portland area, and represent the years 1999 and 2000, respectively.

Snow Plow is a beer that fans have been clamoring for since the beer was discontinued nearly ten years ago. The first beer in the Collaborator Project with the Oregon Brew Crew, Snow Plow Milk Stout incorporates lactose (milk sugar), wheat, black malt, and oats, giving it a soft, creamy mouthfeel and roast malt notes. Snow Plow was the brewery’s winter seasonal for six years, and won a GABF Gold Medal in 2004. To this day, it is still one of the most requested beers for Widmer Brothers to resurrect.

“Snow Plow Milk Stout has always been one of my favorites, and probably my favorite beer from the Collaborator Project,” said Rob Widmer, co-founder of Widmer Brothers Brewing. “The Collaborator Project with the Oregon Brew Crew has produced some inventive styles and individual beers, and we are extremely proud that the program is still going after 15 years. The selection of Snow Plow in the early years of the competition and decision to make it the first bottled milk stout in the United States speaks to the innovative nature of the Collaborator Project.”

Old Embalmer Barleywine was part of the Brothers Reserve Series as recently as last year, and has been brewed since 2000. This beer was created by Doug Rehberg, longtime Widmer Brothers brewer, and called for more malt than could fit in Widmer Brothers’ mash tun in the year 2000. It also called for a copious amount of hops, making it a favorite among brewers and Widmer Brothers fans alike, currently scoring 96 on RateBeer.

As part of the 30 Beers for 30 Years Series, both beers are brewed to their exact recipe and specifications from their original year of release at Widmer Brothers’ 10-barrel pilot brewery.

Like all beers in the 30 Beers for 30 Years Series, an extremely limited quantity of each beer was brewed and packaged with unique label art from one of 30 different local artists and designers. Alex Despain of The Despains designed the Snow Plow label, and Jason Miranda and Erik Johnson of Overhaul Design Shop designed the Old Embalmer label. To see all the labels and learn more about the artists and the inspiration for their designs visit www.30beersfor30years.com.

About the Beers
Snow Plow Milk Stout – 1999
Since 1999, we’ve worked with the Oregon Brew Crew, a local homebrew club, to brew winning homebrew recipes at our brewery. Snow Plow was the very first Collaborator, and one we chose to bring into our lineup as a winter seasonal. Contrary to most winter ales on the market at the time which used some dark malts and were very hoppy, this beer was extremely dark, used a ton of specialty malt (which had to be hand-loaded, making it one of our most labor-intensive brews), and had a sweet characteristic from the use of milk sugar. Behind Widberry, this is our most requested beer to resurrect. 6.1% ABV, 25 IBU

Old Embalmer Barleywine – 2000
A big beer. A very big beer. Using more malt that would originally fit in our mash tun, Doug Rehberg’s recipe also called for copious amount of hops, making it one of the most interesting barleywines out there. Age does this beer wonders, as the name would suggest. 10.2% ABV, 70 IBU