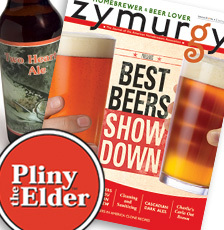 Zymurgy has been conducting the annual survey for eight years, inviting readers to send in a list of their 20 favorite beers that are commercially available beers in the United States. Votes were received from Zymurgy’s 22,000 readers around the world.

“We are flattered to be voted Zymurgy’s number one beer for a second year in a row,” said Russian River owner and brewer Vinnie Cilurzo. “Russian River is so blessed to have such a great customer base that seeks our beer out and often travels from all over the country to visit our brewpub. We are very appreciative of the homebrew community and the support they give us!”

“As homebrewers and beer lovers, Zymurgy readers are some of the most knowledgeable beer connoisseurs on the planet,” said Jill Redding, editor of Zymurgy. “This is a very prestigious list to be on if you’re a professional brewer.”