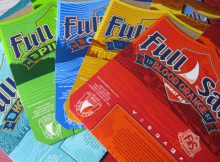 Uncategorized
Full Sail Brewing has joined forces to be part of the group of 69 craft brewers that have joined the Ales for ALS™ campaign. This campaign supports the
Read More