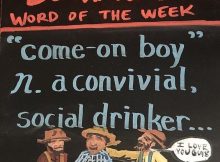 Beer Travel
The 17th Annual Boonville Beer Fest returned on May 4, 2013 as a highlight in a fun-filled and beer-soaked weeked in Anderson Valley.
Read More