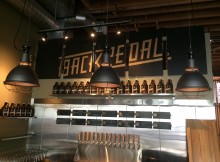 Beer Brewing
The latest brewery in Portland to serve its beers is BackPedal Brewing. Located in Portland’s Pearl District and boldly directly next door to 10 Barrel Brewing, BackPedal is
Read More

Beer news
As Brewpublic reported yesterday, it is now confirmed that Bend, Oregon’s 10 Barrel Brewing will be opening a new brewpub in Portland this summer. 10 Barrel will
Read More

Uncategorized
Portland’s Mellow Mushroom pizza will close their doors in one week. Home to 50 rotating taps and what we feel was some tasty grub, this spot will be
Read More