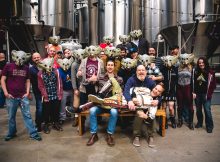 Beer releases
Jackson, WY and Cincinnati, OH (January 8, 2018) — As part of a series of limited-release, ongoing collaboration projects with only the most over-the-top small-batch breweries around the
Read More