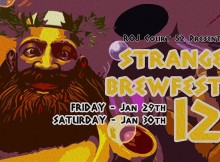 Beer events
One unique way to close out the month of January is by attending the 12th Annual Strange Brewfest in Port Townsend, Washington from January 29-30. The 2016 edition
Read More