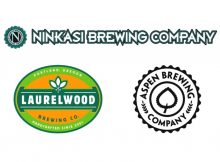 Brewpubs
Here's a look at some of the pours that occurred around Portland, Oregon for Zwickelmania 2013.
Read More