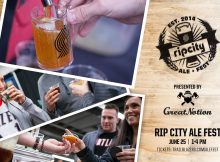 Beer events
Though the Portland Trail Blazers’ NBA season came to an early close during this past season, the team along with Great Notion Brewing will host the 2022 Rip
Read More

sports and beer
For fans of the Portland Trail Blazers and craft beer there’s an upcoming event that’ll make you come out to the Rose Quarter on Sunday, March 30th. Rip
Read More

Uncategorized
As Laurelwood Brewing is about to celebrate thirteen years in business later this week, they announce their entrance into the Philadelphia craft beer scene. Beginning later this month,
Read More