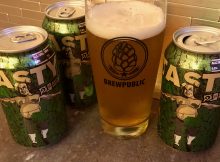 Uncategorized
Drake’s Brewing is making the the trip from San Leandro, CA to hit up Portland in style this week. While in Portland, Drake’s will be pouring their new
Read More