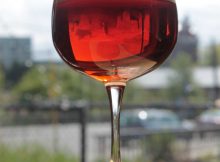 Beer releases
For those of you fortunate enough to reside in Northwest Washington State, Chuckanut Brewery has collaborated with a group known as the Bottleshop Collective to brew an old
Read More