Beer releases
For its quarterly beer release in August 2020, Alesong Brewing & Blending reveals a few new beers and the triumphant return of one the brewery’s favorites. Over the
Read More 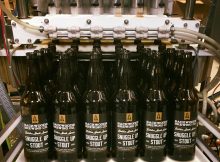