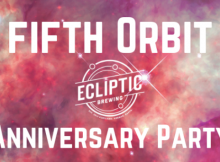 Beer events
Ecliptic Brewing will celebrate its fifth orbit around the sun on Saturday, October 20th when it hosts its Fifth Orbit Anniversary Party. This daylong anniversary will begin at
Read More

Brewpubs
Returning for the 4th straight year this Thursday, August 15th is the Deschutes Street Fare outside its pub in Portland’s Pearl District. So once your done with
Read More