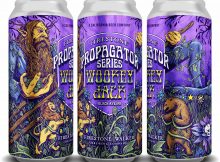 Beer releases
To kick off the New Year, Firestone Walker Brewing returns with a limited run of its fan favorite Wookey Jack. Brewed in Venice, California at the brewery’s Propagator
Read More

Beer releases
One year ago Firestone Walker Brewing decided to discontinue Wookie Jack, one of its beers that had a strong cult like following. But now the brewer has decided
Read More