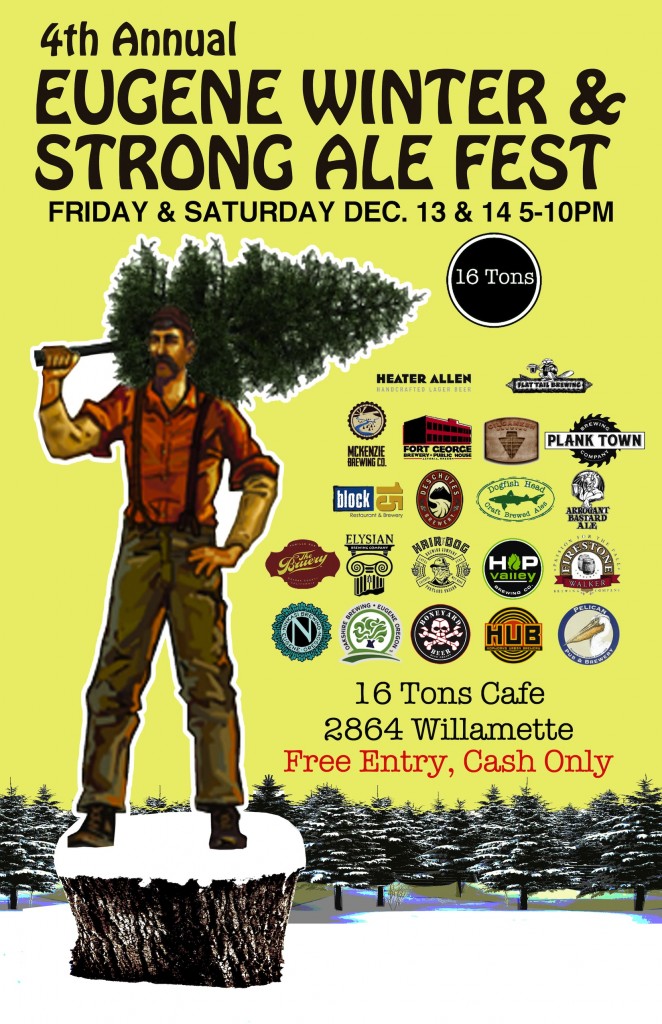 This weekend 16 Tons Cafe will be hosting their 4th Annual Eugene Winter & Strong Ale Fest on Friday & Saturday December 13-14. Here is your chance to warm up with Winter Ales at 16 Tons Cafe, in the heart of South Eugene.

The festival itself will run from 5 to 10pm each day. Entry is free and tasters will vary from $1 to $2. Make sure to bring cash since this special event is cash only.

Mike Coplin, owner of 16 Tons Cafe, says that “of all of the beer events I have taken part in, the Winter Fest is dearest to me because it was the first such beer fest we held at 16 Tons when we opened nearly four years ago.” The 16 Tons crew will serve up more than 50 Craft Beers including: Belgian Strong Ales, Barrel Aged Ales, Spiced Ales, Barley Wines, Imperial Stouts, Imperial Browns, Strong Sour Ales, Traditional Old Ales, rare imports and Winter Style IPAs. If you’re in Eugene this weekend this is an event one should not miss out on.

The Eugene Winter & Strong Ale Fest provides a unique opportunity to sample seasonal, one off, and rare beers from renowned brewers from Oregon and beyond. 16 Tons guarantees to have an extremely eclectic and interesting lineup of beers unmatched anywhere in Oregon. For the novice and the experienced beer enthusiast this event is an incredibly fun opportunity to sample and savor some of the most sought after beers in the world. Bring your friends and share some sips.

About 16 Tons:
Offering Eugene’s largest selection of fresh draft beer to go in eco friendly reusable containers. 16 Tons has a combined 30 taps of rotating craft beers that are available to go or by the pint. 16 Tons Taphouse offers a constantly evolving and updated selection of 300+ craft beers and 250+ wines, and nearly 100 Ciders. 16 Tons Taphouse located on the corner of 13th & High St and 16 Tons Cafe located in Woodfield Station at 2864 Willamette. Info: Mike Coplin (541) 953-2530, mike@sixteentons.biz