The 21st Amendment Brewery today announced the release of its first ever, limited release, specialty beer in a can. Monk’s Blood is an 8.3% alcohol, dark Belgian-style ale brewed with eight malts, Belgian candi sugar, cinnamon, vanilla bean, dried local black mission figs and aged on oak for a flavor unlike anything you’ve ever had from a can. 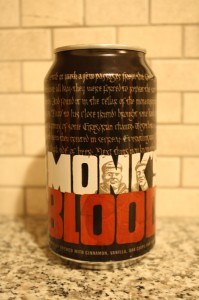 Brothers Nicolas and O’Sullivan (21st Amendment founders Nico Freccia and Shaun O’Sullivan) developed the beer as an homage to the monks of Belgium’s monasteries who have been brewing some of the world’s great beer for centuries. “During times of fasting, the monks subsist solely on beer, which they refer to as ‘liquid bread,’” notes Brother O’Sullivan. “Beer, quite literally, is in their blood,” he adds. The most sublime of the monk’s premium brews is dark like blood, rich and nourishing.

Freccia and O’Sullivan traveled to Belgium to develop the recipe for this special beer, visiting small, traditional breweries in the hop fields of west Flanders, not far from the famous Trappist abbey of Westvletren. Notes Brother Nicolas, “Monk’s Blood is designed to pair beautifully with rich winter stews, creamy cheeses, unctuous desserts or just by itself, in a Belgian tulip glass, with a good book by the fire.”

Monk’s Blood is available in cans and on draft starting this week at better bars and stores in your neighborhood. For up to date availability, events and promotions, visit 21A’s website at www.21st-Amendment.com.

Insurrection Series: Monk’s Blood is the first installment in our Insurrection Series, a limited edition, once-in-a-while, four-pack release of a very special beer that rises up in revolt against common notions of what canned beer can be.

On a recent cold December night Brewpublic had an opportunity to taste the Monk’s Blood with DA of Beer Around Town. Here are our tasting notes:

The beer smelled of tart cherries and tasted of sweet figs. The tasting panel found the huge fig profile to be a bit overwhelming. As one taster noted “We all don’t love a figgy pudding.” There was a prominent presence of yeastiness and fruity esters accompanied by a saccharine flavor that lingered into a tongue-coating mouthfeel. The business of all this and Northwest hops, we felt, resulted in his brew was found to be a bit too cloying. Overall the beer recieved a rating of 3.5 out of 10. Maybe another tasting of this beer is in order. We salute 21st Amendment’s imaginative efforts and creative ingredients but question if the final outcome was worthy of devoting to its own canned brand. But be your own judge. Cans of Monk’s Blood can be picked up at Belmont Station. Also, currently on draft is the Back in Black IPA by 21st Amendment. Quite possibly the best Black IPA I have tasted to date.