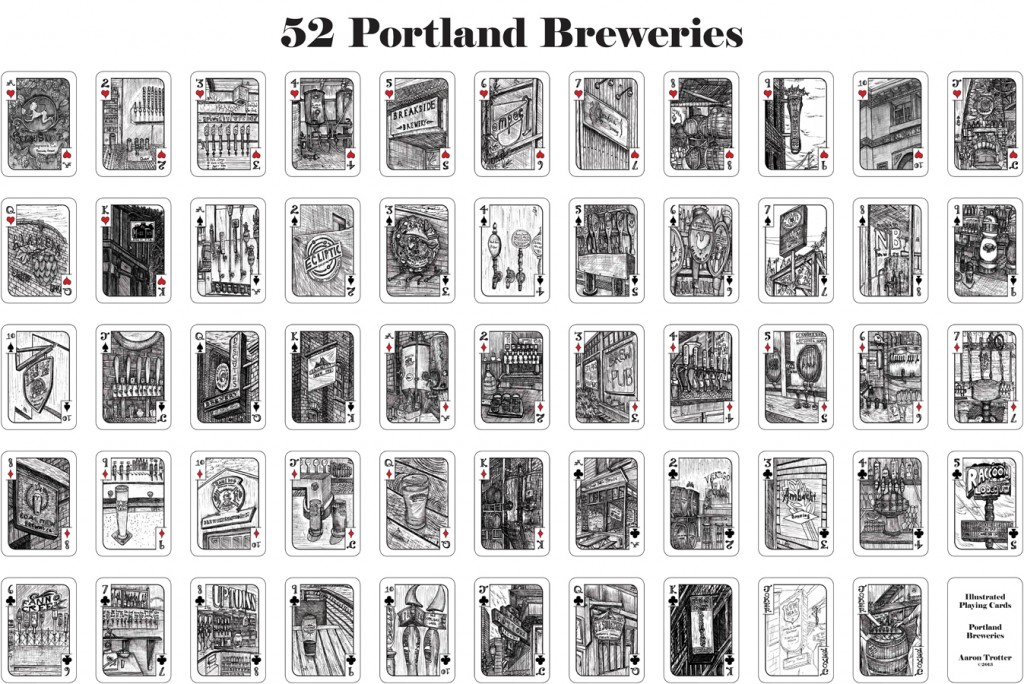 The Portland Brewery Deck is the third in a set of Portland-themed playing cards created by Trotter. The back of each card features an effervescent golden ale, while the front features one of the 52 drawings, each of which was sketched on location without the aid of a photograph. Trotter embellished and added crosshatching details to the images in his studio using his Great-Aunt’s 1910 ink pen.

The decks are printed locally on UV coated card stock, have rounded corners and are shrink-wrapped. Every deck comes in a signed and numbered hand-folded box, and includes an illustrated map of the featured locations along with random beer trivia. The deck retails for $20 and is available at a number of Portland locations and online at www.illustratedplayingcards.com.

Trotter conceived of the Portland Brewery deck earlier this summer in conjunction with Oregon Craft Beer Month as a way of using his art to celebrate Portland beer and promote local breweries.

“Capturing and celebrating Portland icons is my labor of love, and with so many breweries in the city, it seemed like a natural fit to create a brewery deck,” explained Trotter. “I have drawn many great cities, but it is always a pleasure to discover and share a new treasure in my own town, and the Brewery Deck allowed me to do just that.”

Since producing his first deck of illustrated cards in 2010, Trotter has distributed thousands of handcrafted, locally produced decks across the country. His drawings are documentary artifacts that capture a visual record of iconic landmarks for a growing roster of cities, including Astoria, Bend, Eugene, Las Vegas (in color!), Los Angeles, Manhattan, Paris, Portland, San Francisco, Rome, Seattle, Vancouver BC and Washington DC. For more information, visit www.illustratedplayingcards.com.