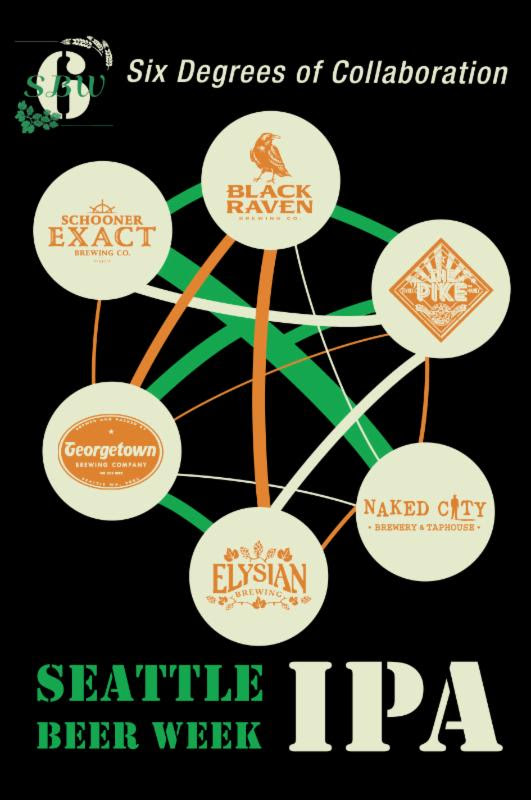 Six Degrees of Collaboration, is said to be a session IPA that should weigh in at around 6% alcohol. Being near 6% ABV and calling this beer a session IPA maybe pushing the boundary a bit. In addition to the crew at Elysian, the other five participating breweries were Georgetown, Black Raven, Naked City, Schooner Exact and Pike.

The official draft release of Six Degrees of Collaboration will take place on the opening night of Seattle Beer Week. On May 8th at 5:00pm, the draft version will be released at Elysian’s Captial Hill location.

“Sixth Sense? Six Appeal? Six to the Sixth? 666 (Mark of the Yeast)? House (Yeast) Party? These were other names considered before Six Degrees of Collaboration was settled upon, especially appropriate in that not only among this little crowd of six, everyone in the brewing industry knows each other anyway.” says Elysian’s Dick Cantwell.

ABOUT SEATTLE BEER WEEK
The goal of Seattle Beer Week is to celebrate and showcase the incredible beer community of the Northwest, especially the Seattle Beer Market. We have world class beers being brewed here as well as world class bars and restaurants that specialize and care about the quality of the beer and food they serve. What better way to showcase this passion and love than to celebrate it for an entire week!

ABOUT ELYSIAN
Elysian Brewing Company operates three neighborhood brewpubs and a production brewery in Seattle, WA. Known for innovation, flexibility and variety, Elysian has brewed more than 300 different beers since opening its doors in 1996.