Brewpublic’s Quebecois correspondent Marc Demeule is a lover of craft beer.  Raised outside Montreal, Demeule is bi-lingual but his native tongue is French.  His tongue also has an affinity for the plethora of beer styles throughout the world.  On a recent trip to Portland, Oregon, Demeule visted an most brepubs in and around the Portland metro area including some 176 different beers.  Here is his documentation of his journey in pursuit of great beer.

There are excellent breweries from the US (Ommegang, Southern Tier, Dogfish head, Stone).  Portland is known as the city with the most breweries in North America, so it makes sense to fly to Portland for an ultimate beer trip.  I do recommend it.

Everybody is yelling.  Is there a lack of beer?  No, it’s just a new president.  Good luck dude.  My hostel is in NW, 600m from Rogue.  Just enough time to have a sample tray, because it’s Monday night.  The staff told me about some places to go and places to forget.  They also provide me the beer map of Portland, an essential tool. It should be available on internet. 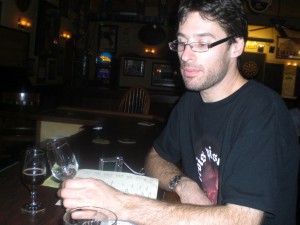 With the beer map and the free fare bus, nobody needs a car in Portland.  It’s very easy to reach most of the breweries by foot and having a walk let you discover the city.  If you’re too lazy, have a bus pass.

Rock Bottom Awesome that they have a cask version of their IPA.  The swan island lager was also impressive.  Nice place for the food too.

Widmer The biggest micro visited and it might be considered as a small macro. Huge installations.  Nice looking place.  I should have had time for a brewery tour, but it didn’t fit to my schedule.  Good menu in the kitchen. 13 different beers on tap.  Those guys have their own hop fields and do hops variety trails (Summit and Citron) which are used in special brews (X-114 IPA).  They also brew with tea.  Personally, I just don’t understand why. 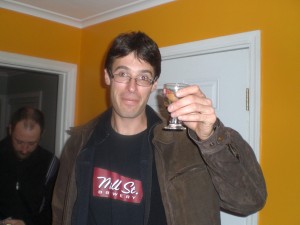 Amnesia Brewing AAAhhhh!  What a good smell when you push the door.  I want this for my car freshener!  Brewing is good for all the senses.  I would compare Amnesia with a traditional sugar camp in Quebec.  Forget about the shinny family restaurant look.  This place is dedicated to beer first and people will get used to it.  A simple bar and picnic tables.  I’m not sure, but I think the kitchen was in another building and the beer tender has to get out for the food orders.  Well, just drill a hole in the wall, I’m here to drink.  So, 5 homebrew and one guest tap from Caldera Brewing (pilsner).  Two IPA on the board.

Bridgeport brewing Co. Wow.  I would like to live near this nice brewery and bakery.  It’s one of the oldest breweries of Portland.  Kind of an ancient factory completely redesigned.  Lovely place.  Very good service from the staff.  I had my best lunch at this brewery (pastas).  They fortunately make some bottles, like the Hop harvest ale.

Alameda brew house Don’t do it by foot like I did.  Brewhaha’s map doesn’t reflect the reality, especially for the scale.  Take the bus, this city isn’t as small as it seems.  Take the 7 days pass cause it’s always raining too!  I understand why there are so many breweries; people are desperate about the weather!  Sucks.  Well, instantly you forgot that when you’re welcomed by a Black Bear Stout advertisement.  9 good to excellent homebrews.  Might be a dedicated place for the happy hour.  Food and service where excellent. 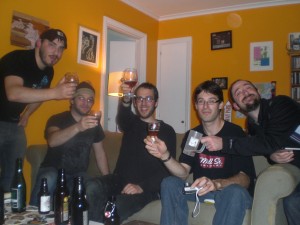 Bailey’s Tap room I had a « professional » meeting with Angelo and Margaret there.  Without this, I would have probably passed through this tap bar and it would have been a major mistake.  After sharing few bottles of our « own » breweries, we did explore the HUGE menu of this place.  20 taps + an impressive beer menu.  This place is very easy to reach Downtown and should be highly considered.  Probably some room for 50 people, music not too loud and the prices where fair.

Deschutes brewery Located near Rogue, a big place, often crowded, even at the bar.  Service was very good and the beers too.  The Fresh Hop style is very interesting.  I wish we’ll be able to brew some fresh hop style in Québec one day.

Roots organic brewery My plan was to reach the Lucky Lab, but the efficient advertisement on the street drove me to this « Jamaican Style Man » brewery.  Again, that excellent brew smell is everywhere. The place is small but friendly.  I had the chance to meet Craig the brewer.  Very cool.  As mentioned, each brews ( 8 ) are made from organic ingredients and it doesn’t reflect on the price of the beers.  I also tried bottles from them.  It’s a higher grade.  I’m glad to see that they brew some extreme beers.  A must if you visit Portland. 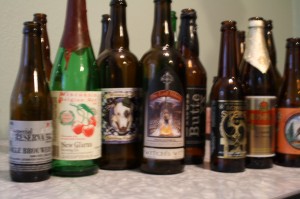 The Lucky Labrador brew pub If I have the chance to come back to Portland, it will be in summer time just to see a terrace crowded with dogs.  This brewery as the ugliest logo I have ever seen, but it certainly won’t stop you if you’re thirsty.  The hall is covered of lovely Labradors which makes an original decoration.  The place is spacious.  The brewery is powered (partially?) by solar energy.  A good improvement.  Negative thing:  I had to go to the bar to order my tasting panel & food and I cleared my table before leaving like in a high school cafeteria.  Otherwise, I had my biggest tasting panel ( 13 ), all doggy named.  They also had a guest tap and a cider.  The quality was from poor to excellent.  The abv % should be written on the board.  It wouldn’t influence my ratings, but it’s always nice to have this information.

Life of the Riley tavern Recommended by people randomly met.  It is more a sport bar with flat screen wall TV displaying insanities (according to me of course).  On the first view, you don’t think it was a wise plan for a good beer, but the charming bartender has a Colgate smile that convinces you.  I took a Trummers pils (very good), a New Belgium Mighty arrow pale ale (not interesting at all) and the two St. Bernardus they have on tap.  So nice monk beers!

Belmont station 1000 different beers.  This place is a happy problem.  I should have taken a moment at the bar beside.  Lots of choice, even Dieu du Ciel!  A little bit far from Downtown.  If you can’t reach Belmont Station, some groceries Downtown have a good inventory too (like Fred Meyers).

Hopworks Urban Brewery Believe it or not, I had sunny time while reaching HUB.  My first goal was to go to the Hair of the Dog, but it was closed. :o(     HUB is located in a modern building.  Large windows, big terrace, seats for lunch. 9 very good to excellent beers and an excellent barley wine.  I think they’re all organic.   Yes, I bought the t-shirt and would definitely return to that place for the beer and, to be honest, also for that tall redhead girl behind the bar.

Rogue Is an institution.  You can’t go to Portland without a visit to Rogue.  I’ve been there three or four times during my trip.  Because my hotel was near, and because it’s Rogue.  For now (bottles & tap), I’ve tried 17 different Rogue.  Quality is constant, good to excellent beers.  Staff was very friendly.  I took one meal and the food was great.  More than 20 tap on the board.  It’s almost too much, but it’s so good.  It’s also possible to visit the distillery, but my goal was for the beer first.

New Old Lompoc The darkest place I’ve been.  They should really try doing to something because it’s not very inviting.  Who cares when you brew a 100 IBU IPA?  Hops crisis?  Not here.

The Victory I only remember a glass of Ommegang Grand cru, you can’t always note everything.

Horse brass I’ve been to England once so I can confirm that this is a really English-style pub with smokers and a broken restroom.  I got there a real tourist-friendly treatment.  I have never drunk such top beers for a so cheap bill.  Thanks to my Portland guides.  Don’t miss this tap bar.

Laurelwood brewing Co. I know a lot of home brewers who would be proud to brew beers like Laurelwood do.  But after touring and tasting for a week, I’ve been disappointed.  Nothing to impress a beer geek.  Nevertheless, the barley wine I had at the Horse Brass was excellent.  The public house is inviting, service is good but the tasting tray was very expensive.  10$ USD for an 8 samples tray instead of 7$ in others (and better) breweries.  I would suggest grabbing some beers in a grocery instead, even if you have to drink in a park and share it with the bums.

McMenamins – Blue Moon – Everywhere you go, there is a McMenamins.  This brewery has more than 10 public houses, pub and bars in Portland.  Each place has a different theme, according to the building they’re built in (theater, school).  I took the nearest from my hotel and I had a nice beer experience.  Don’t know if the crafted beers are different from a location to another, but it would be a good marketing strategy.  They also had a guest tap from Blue Moon brewery.

Hair of the Dog HOTD was the main purpose of this trip. Take an appointment like the answering machine does suggest.  Otherwise, it might be closed.  It is also tricky to find the brewery.  The other solution is to knock at the door like a lost tourist and hope that Alan will open the gate of heaven.  He did it, because used to beer geeks who can’t correctly use a phone to get an appointment like me.

Did you read Dave?  Yes.  I had the privilege to taste a small glass of Dave.  Thanks again Alan, now I can die.  Unfortunately, I was too soon for the annual sale, but I bought a six pack of « common » hotd beers.  Don’t miss this brewery and call for a visit before coming to Portland because you miss one of your beer life experience.

Beer tasting session with the Brewpublic team Thanks to Angelo and Margaret for inviting me to this tasting session.  I guess there is a universal beer tasting setup because I felt like I was in Montréal.  Friends, beers, food.  Need more?  Thanks for those incredible beers.  Hope to see you in a beer fest in Québec.

Summary According to my notes, I had the opportunity to taste 176 different beers on that 7 days trip. Here is a Top 20 of the best beers tasted.

And, according to my own taste, here are the worst I’ve tasted.

For comments, insults or others, you can reach me:

marc@brewpublic.com , on Facebook, or at the Extreme Best fest in February in Boston, session II.