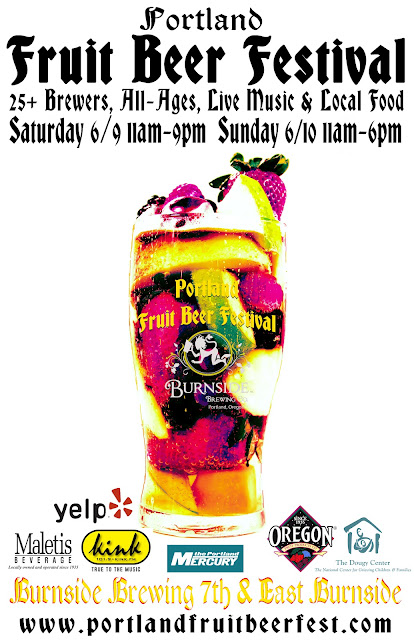 Burnside Brewing recently hosted a media-preview for a handful of craft beer bloggers, photographers, and writers to get a sneak peak at a some of the beers that will be pouring at the Portland Fruit Beer Fest this coming June 9th & 10th. We were treated to seven different brews with four brewers on hand to elaborate and explain some of the history and work that went into each beer they brewed.

We started off with Jason McAdam pouring Burnside’s Red Light District.  An imperial stout brewed with 44 pounds of Belgian chocolate and 400 ponds of strawberries aged in Pacific Rum barrels.  Dessert definitely comes to mind while sipping this decadent beer. 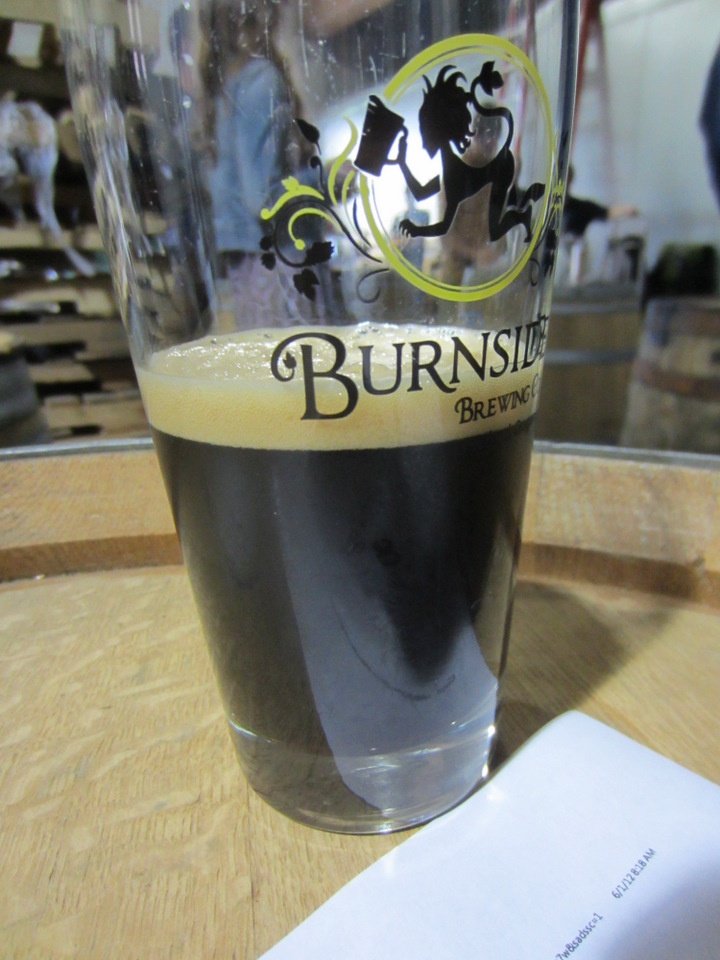 We then moved on to Lompoc‘s Bomb.com from brewer Irena Bierzynski. It’s a blend of three beers; Kick Axe fermented in Port barrels with tart cherries, Cherry Bomb, and Lompoc’s Wheat Wine.  It had a nice tartness but was hard to gauge as was still a few days away from being fully carbonated.  Still a very pleasant sour cherry characteristic.  More info on Irena’s brewing of the beer can be found here.

The next beer we tasted was a very unique brew from Laurelwood Brewing called Cascara Obscura.  This beer falls somewhere near the Belgian dubbel style and is brewed with Hawaiian cascara (the fruit that surrounds a coffee bean) which was collected by Portland Roasting.  A nice, slight tartness and bitternes come through to compliment the maltiness of the style.  Brewmaster Vasilios Gletsos was on hand to talk about the origins and creation and you can find a great video of what went into the beer here. 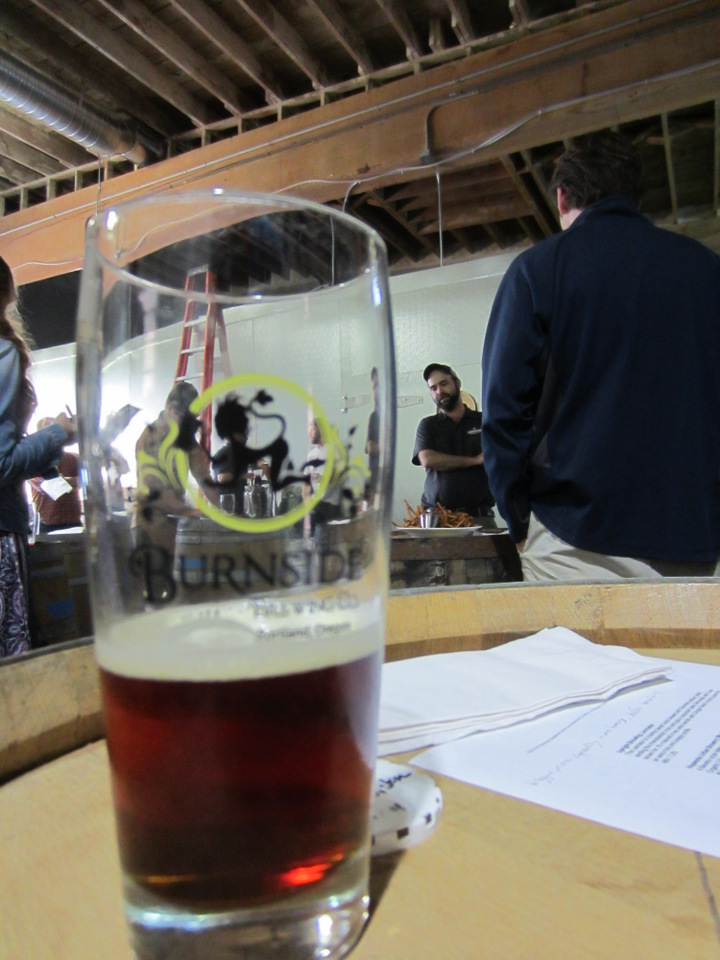 We then moved on to ‘Word-Up’ Apple-Weizen from Hopworks Urban Brewery which is a Bavarian style Hefe brewed with organic cameo apples. For more info on this beer the Fruit Beer Fest blog page has a great video on it.

Our next sampling was a new rendition of the ever popular beer from last year’s fest, Widmer Brothers Hibiscus Gose.  This year brewed with Oregon grown Marionberries as opposed to last year’s version which raspberries were used. 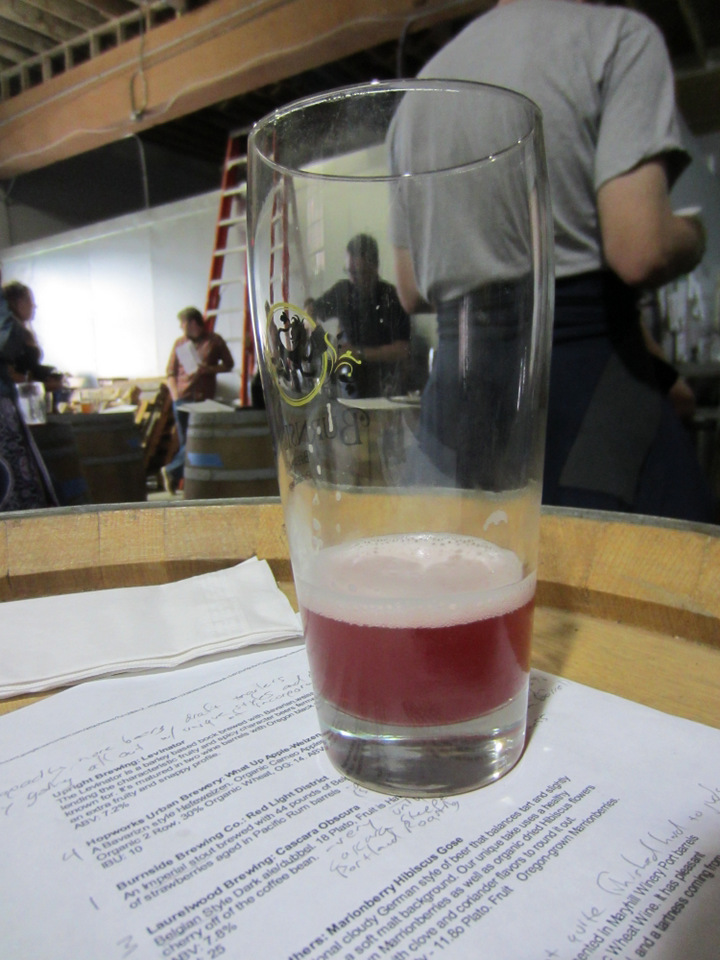 A very attractive, refreshing and drinkable beer, this is even now being produced on a large scale by Widmer.  The raspberry version was one of my personal favorites at last year’s fest and I’m sure the marrionberry won’t disappoint.

The next beer up was from Upright Brewing called Levinator and will most likely be a popular draw at the fest.  It’s a barley based bock brewed with Bavarian weisse yeast then matured in wine barrels with Oregon black currant puree. 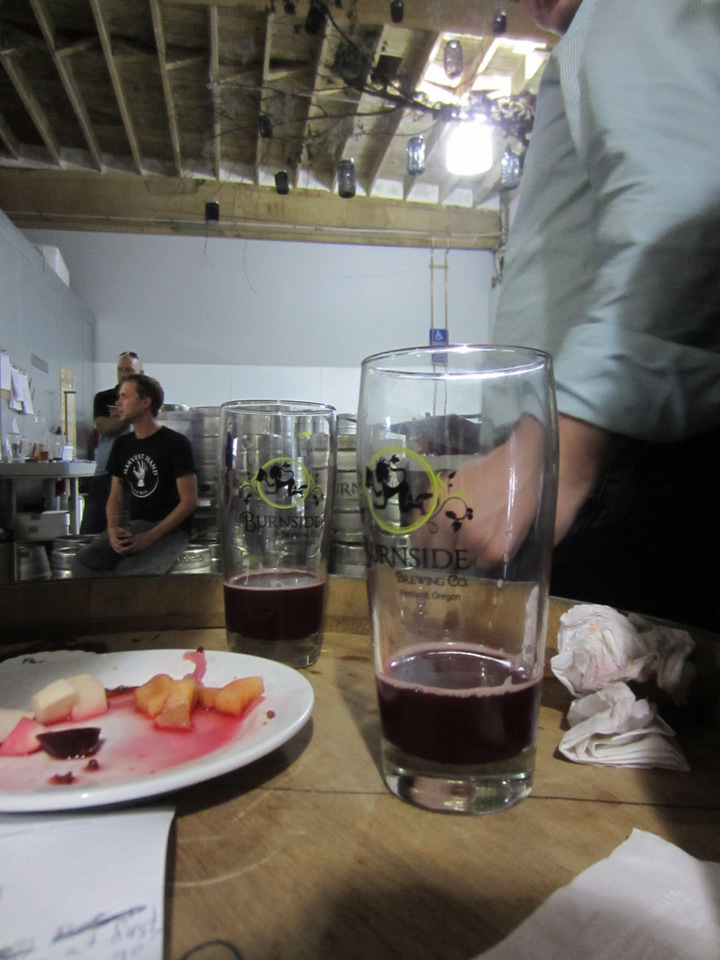 Brewer Bobby Birk was on hand to talk a little about the brewing process and pour us samples.  Not just a super delicious fruity, spicy flavor but visually pleasing too.  I am eager to have this one again.

And last but definitely not least (and definitely no lack of controversy) we come to Burnside’s one and only Barrel-Aged Mango Kali-Ma International Incident. Brewmaster Jason McAdam was on hand again, pouring this and sharing his passion for the creation of this brew. 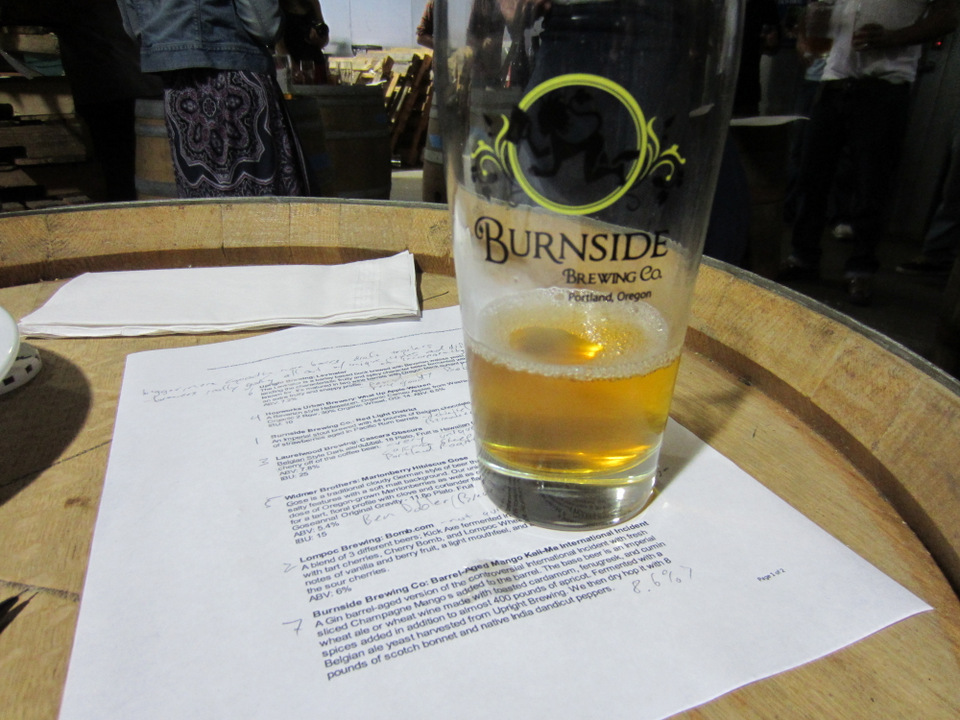 It is a gin-barrel aged version with sliced champagne mangos added to the barrels with the base beer being a wheat wine made with toasted cardamom, fenugreek, and cumin in addition to almost 400 pounds of apricot.  Fermented with Upright Brewing’s Belgian house yeast and then dry hopped with 8 pounds of Scotch Bonnet and Indian Dundicut peppers.  Wow, right?  And yes, when you drink it all of that going on.  Fellow beer blogger Brian Bolduc of Beaver State Beer and I both exclaimed the same word after a taste: “Crazy”  I thought of it as being some sort of great spicy, fruity wing sauce in beer form. Wont be surprised if this one goes fast next weekend. 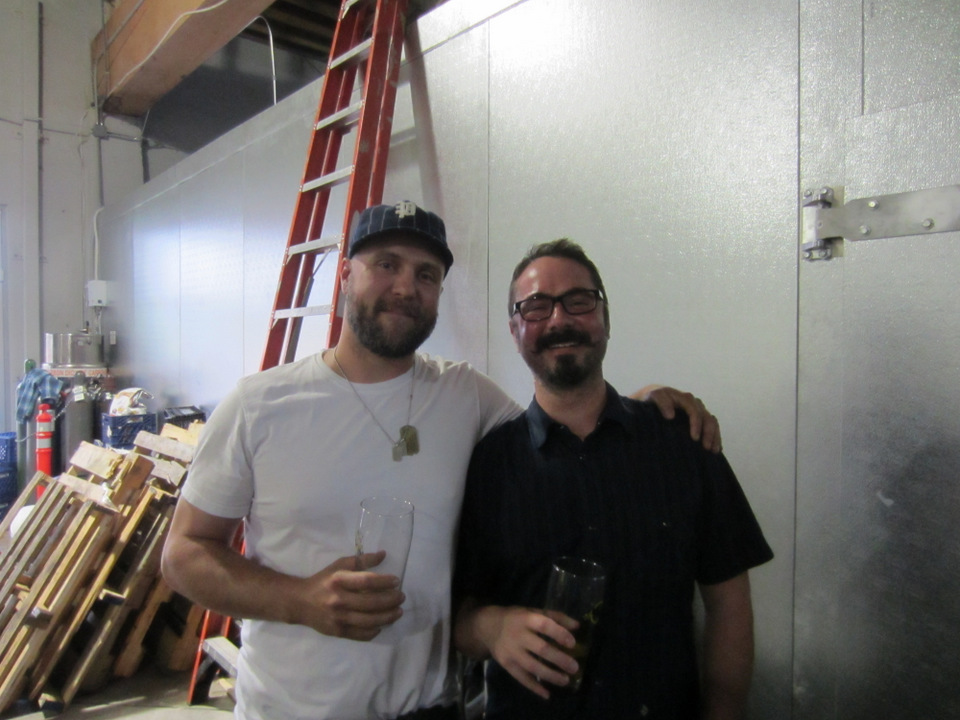 Thank you to organizer Ezra Johnson-Greenough and all the brewers of these fantastic beers, it’s going to be a beer fest you don’t want to miss.