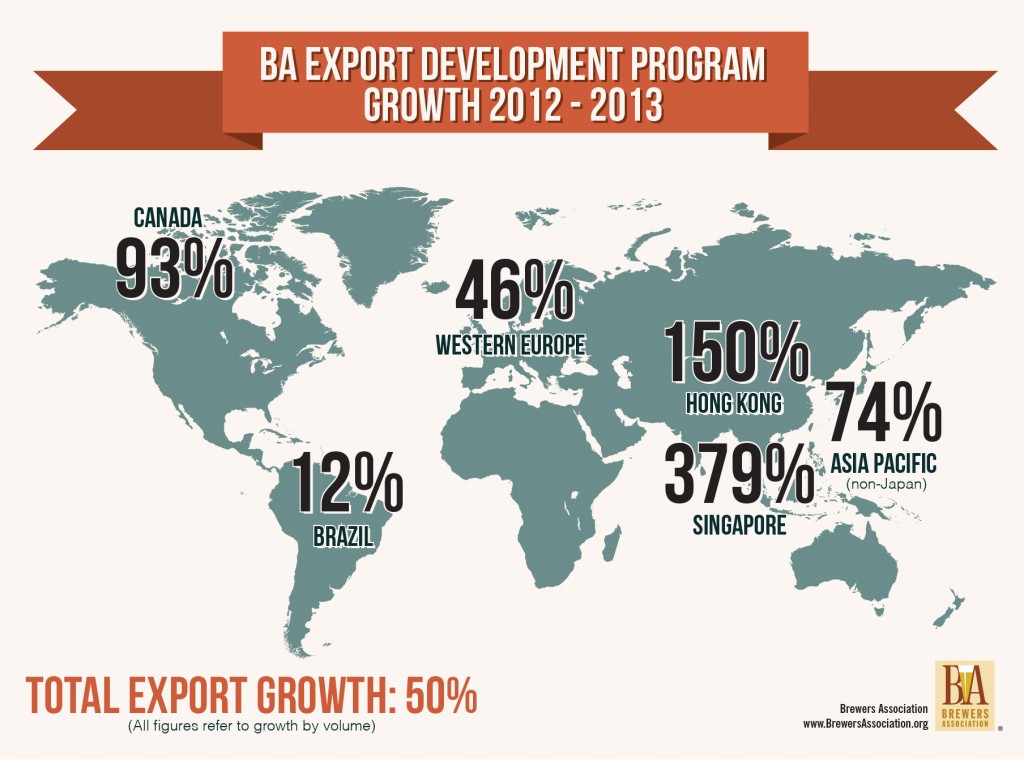 Canada remained the industry’s largest export market, with shipments increasing 92 percent by volume (up to 131,511 barrels) in 2013. Sweden (15.5 percent) and the United Kingdom (7.9 percent) remained the next two largest markets, with Australia (5.4 percent) and Japan (3.2 percent) following.

In total, shipments to Asia Pacific (non-Japan) increased by 73 percent and accounted for 44,228 barrels. American craft beer exports have increased substantially in the Asia-Pacific region largely due to emerging markets such as Singapore (up 379 percent), Hong Kong (up 150 percent) and Thailand (up 99 percent).

“Exports of American craft beer continue to expand in the international market, reflecting craft brewing’s overall success as an industry. New distribution agreements for U.S breweries throughout Europe and Asia are helping to grow exports,” said Bob Pease, chief operating officer, Brewers Association. “This sustained growth is a testament to the innovation of small and independent American craft brewers and the enthusiasm of beer drinkers internationally. With more beer exported around the world, the challenge now is to ensure that beer quality is preserved in all cases, so consumers are assured a positive experience. This is an area of focus for the Brewers Association and the Export Development Program.”

The BA supports exports through its Export Development Program (EDP) which was initiated in 2004 with funds from the United States Department of Agriculture Market Access Program (USDA MAP). The EDP generates exposure for American craft beer through trade shows, festivals, seminars, media outreach and competitions, among other activities.

“Expanding the footprint of American craft beers internationally is an important goal for small and independent craft brewers. We are thrilled to see the increasing appreciation of and demand for American craft beer in markets outside of the U.S.,” added Eric Wallace, president and co-founder of Left Hand Brewing Company and chair of the BA’s Export Development Program committee. “The EDP will continue to promote American craft beers through its focus on quality and diversity to ensure they flourish abroad over the long term.”