With the proliferation of craft beer across the continent, more and more regions are celebrating the ever-growing propensity our palates have for locally made artisan products. This is not just evident in the more than 1700 Craft breweries alive in the United States, but in many other facets of everyday living. Slow food and the push toward sustainable community goods exemplify a focus on the benefits of not just better ingredients, but a system that is more conducive to parochial economic prosperity. American Craft Beer Week, as denominated by the American Brewers Association (BA), limelights such inward growth that is outwardly advancing amplifying, and augmenting.

Steadily outdoing themselves, American Craft Brewers (most who began as homebrewers) continue to blaze the trail in a seemingly ceilingless rise, consuming shares of the multinational macrobrewing marketshare. For the first time in its brief six-year history, the BA will endorse official American Craft Beer Week events in all 50 states. 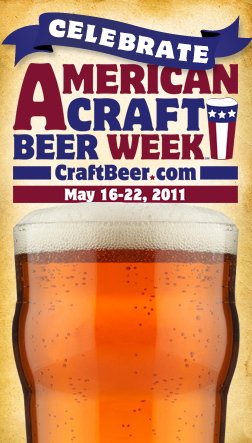 The 2011 American Craft Beer Week will run May 16-22, and according to spokeswoman Julia Herz,“There’s no doubt about it—nationally, appreciation for craft brewing has reached new heights of popularity…With celebrations in all 50 states, American Craft Beer Week has truly earned the title ‘Mother of All Beer Weeks.’” During and around this week, Seattle will host their second annual beer week, and other regions will join including Minnesota, Long Island, San Antonio, Nevada, and Chicago.

For many of us in Portland, Oregon, this may seem as trivial as Asheville, North Carolina voting themselves BeerCity USA, but really, what this means is a benefit to our own perfect world here in Beervana. Since we’ve yet to secede from the rest of the nation, it should be noted that our president himself was enjoying craft beer, including one brewed at the White House, during this year’s Super Bowl. It’s great to know for Portlanders, where every week in Beer Week, we can travel to places like Medford, Bend, Eugene, and beyond to towns in Texas, Iowa, and even Mississippi to enjoy beer as it is best served – Craft.