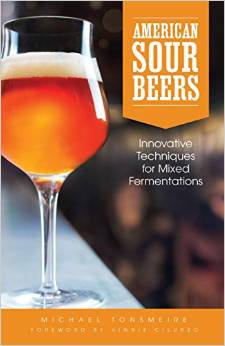 With the recent trend over the past 5 years in American craft brewing, sour and wild beers have become an increasing and enticing segment in today’s craft brewing scene. And this popularity isn’t only involving professional brewers, homebrewers too like to experiment with these new found techniques from the European brewing heritage.

Now available from Brewers Publications is a new book, American Sour Beers: Innovative Techniques for Mixed Fermentations, by Michael Tonsmeire, which provides a comprehensive and dynamic account of American sour beer making for brewers of all levels.

American Sour Beers details the wide array of processes and ingredients in American sour beer productions, with instructional advice every step of the way. Inspiration and practical applications for both rudimentary and advanced brewers are provided by some of the country’s best known sour beer brewers, including Russian River, Jolly Pumpkin and The Lost Abbey.

“For those of you who are just starting to get ‘funky’…use this book to help guide you through this fun and often unpredictable journey,” stated Vinnie Cilurzo of Russian River Brewing Company in the book’s foreword. “This book will also be very useful for those who are already producing sour beers; I’m certain this will be a great reference book to add to your library. I found good nuggets, both artistic and technical, and I am definitely inspired to brew some new sour beers at our brewery”

Tonsmeire is an award-winning homebrewer and beer judge, but has also written about sour beers for various magazines. He most recently developed the recipes and grew microbes for the sour beer program at San Diego’s Modern Times Brewery.

Brewers Publications supports the mission of the Brewers Association by publishing books of enduring value for amateur and professional brewers as well as titles that promote understanding and appreciation of American craft beer. With over 50 titles to choose from, it’s the largest publisher of contemporary and relevant brewing literature for today’s craft brewers, homebrewers and beer enthusiasts.