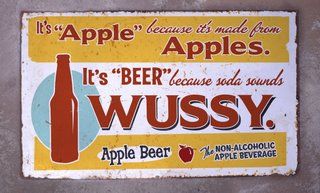 To some the idea of an apple beer may be disgusting.  Or, to the contrary a fruitilicious pomme pivo might just be the thing to quench Johnny Applebrew’s thirst.

Let’s be clear, when I say “apple beer”, I am not referring to hard apple cider or something along the lines of Boone’s Farm Apple Blossom or some so-called “bum wine.” These are artistically crafted beers that are worth your time and palate.

Lindeman’s Pomme: Long before hops were common place, several other ingredients were used to flavor beer.  Among the long list of seasoning was the tempting apple.  Lindeman’s Pomme is a hazy golden, effervescent Belgian from the town of Vlezenbeek. This particular fruit lambic is on the sweeter side, with cidery fresh apple notes and a residual spiciness that pairs well with hardy soups and peppered dishes.  This beer is also a great introduction into beer for cider and wine lovers.

Corsendonk Apple White: At just 3.1% ABV, here is another spiced Belgian treat for all occasions.  With a cloudy straw hue and a giant well-retained head, this is a wonderful substitute for champagne. Spiced with coriander, orange zest, and liquorish, the Apple White carries a mild biscuit malt spine to assure the beer enthusiast of its membership in the world of craft beer.   Brewed and bottled by Brasserie du Bocq in Turnhout, Belgium (about 60 kilometers northeast of Antwerp), this beer is also sold under the name Apple Bocq. Although not one of Corsendonk’s most impressive beers, the beer is like an apple pie in a bottle.  Despite the low alcohol content it is recommended that you do not drink too much of this beer due to its rich nature.

Unibroue Ephemere (Apple) Ale: Brewed in Quebec since 2002, this beer is a crisp, hazed blonde with a large white head, much like the Corsendonk Apple White.  Also like the Apple White, this beer is brewed with coriander spice.  The Ephemere also contains curacao, liqueur flavored with the dry peels of the laraha citrus fruit. At 5.5% ABV, the Ephemere possesses a grittier malt underpinning than the Corsendonk Apple White. Slightly sour, slightly sweet, and decisively cream and crisp, the Ephemere is one of the best apple beers available in the United States. A lot of folks might dismiss some of these apple beers by saying they taste like apple Jolly Ranchers, which is a bit of an exaggeration.  Afterall, these are beers brewed with apple!

Captain Lawrence Golden Delicious: Not yet available in the Pacific Northwest, Captain Lawrence Brewing Company of Pleasantville, New York makes some of the most inspiring beers in North America.  This particular beauty is a Belgian style tripel ale aged in oak apple brandy barrels. Dry hopped with Amarillo hops, the Golden Delicious is just that.  It is to apple beers what the Southern Tier Pumkin is to pumpkin beers. It is unlikely the beer will ever make its way to the Pacific Northwest since only 80 cases were bottled for release in early 2009. If you ever find some more, give me a holler, and I’ll gladly help you drink it.