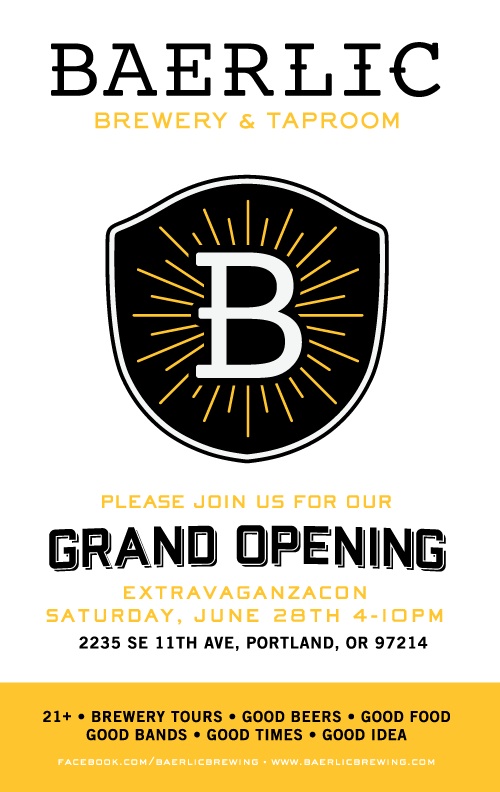 Portland’s newest brewery, Baerlic Brewing Company, hosts its official grand opening this Saturday, June 28th, from 4:00 to 10:00pm. Baerlic will launch their five beer standard lineup along with 4 to 6 specialty beers brewed with fruit, coffee, bourbon, cocoa nibs, and beechwood throughout the evening.

Located in Southeast Portland, next door to Blitz Ladd in the former home of Kettlemen’s Bagels, Baerlic Brewing joins an area that offers an impressive amount of craft beer. The Commons Brewery is located a few blocks north, the aforementioned Blitz Ladd next door and then you have The BeerMongers and APEX a few blocks southeast.

Baerlic will feature a 10BBL brewery and taproom housed in a 7,300 square foot warehouse on storefront on SE 11th Avenue. The inside will feature original fir woodwork and beams, with a utilitarian and contemporary aesthetic all lit up by skylights. The beginnings of the brewery were born out of an undying passion for the perfect pint of beer. Baerlic Brewing Company is a collaborative entity created by Ben Parsons and Richard Hall. After years of brewing on the small scale in a basement and winning numerous awards in amateur competitions all over the region, Parsons and Hall decided they should finally give in to the voices in their heads and move toward a small scale production brewery and taproom.

“When we say The Beer Here Is Near And Dear, we mean it,” says co-owner and brewer Ben Parsons. “We strive to work in as close a proximity as possible for all our ingredients, materials, vendors, supplies, and suppliers. And that allows us to absolutely love the beer that we brew.” Baerlic is focused on brewing the beers they love to drink and doing it in a way that respects the history and art of brewing while also pushing the boundaries on styles and processes. Beer is beer is beer, and historically hasn’t liked to be pigeon-holed in restraints such as styles and norms and old ways of doing things.

“I think the biggest thing we have learned in this process is that Baerlic is not just us, Rik and Ben, and we absolutely could not have done this without the support of our wives and families, and all the incredible friends we have made along the way,” said Hall, co-owner and brewer. “The Portland beer scene is incredibly friendly and supportive and we consider this a friends and family business and want to build something that tells that story. Beer is an amazing and communal thing and we strive to emphasize that in our beers and our taproom.”

And what is with the name Baerlic? The brewery’s press release states the following, “Literally translating to ‘of barley’ in old english, bærlic reiterates the fundamental idea that all things, no matter how complex or involved, can always be traced backward to a single, simple core or point of view. Our point of view comes from a belief that we are all in this together and that our actions shape our world – by being honest, we are approachable; by being consistent, we are trusted; by being considerate, we can sleep at night; and by choosing to keep it simple, we are able to do this really well.”

The 5 Baerlic Beers that will be featured during their Grand Opening include:

Throughout the evening Baerlic will be hosting brewery tours, wood fired pizza from TasteBud and a brewhouse christening. This will be followed by live music from Maris Otter performing from 8:00 to 10:00pm to close out the evening.