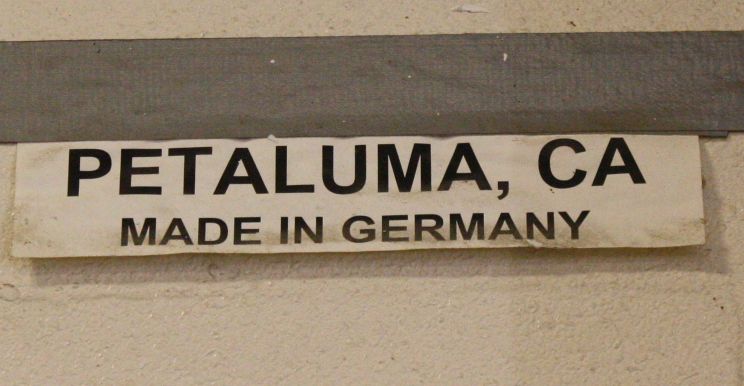 More great beer experiences were had as we continued where we left off in Santa Rosa.  We were zealous to hit the highway.  But, first, I had to stop back at Russian River and pick up a limited 750ML bottle of Russian River’s Beatification.  The Beat is a 100% spontaneously fermented beer with Saccharomyces, Brettanomyces, Lactobacillus, Pediococcus and other wild yeast giving it life.  From old barrels, the beer garners a whirlwind of complexities and sour notes.  The bottle I purchased is the third batch of this brew.

Next stop, Petaluma, home of one of my all-time favorite breweries, Laguintas. We arrived at Lagunitas Brewing Company at about 1:37PM.  The place was a large production facility located in an unassuming industrial park by a large field looking out to rolling hills across from an old train track. As we pulled in, we observed a forklift loading kegs into a tractor trailor from an open bay door.  At the doorway we met Don Chartier.  Don worked in sales for Lagunitas and led us inside and up some stairs into a sort of rec room. 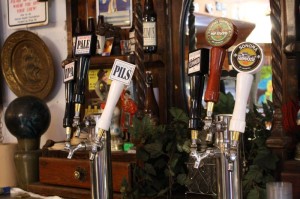 It was very laid back inside.  A lounge of sorts with couches, a bar, lots of cool beer schwag and a stage to the rear.  Large windows from the loft space overlooked the brewery’s bottling line and loading docks.  Chartier said he calls Eugene, Oregon home and misses the rain of the north.  He used to brew with BridgePort and Full Sail, but took up working in sales with Lagunitas because of the chill atmosphere.  He poured us some samples of the New Dog Town Pale Ale and the latest Frank Zappa beer that was being bottled on this very day.  Cruisin with Ruben and the Jets (1968) was a flavorsome chocolate pepper stout brewed to 8.6% ABV, with a healthy amount of chocolate nibs and a subtle zing of white peppercorns.

Just then, we were introduced to Jimmy Jacobs.  Jacobs was in the Lagunitas marketing division and was responsible for working the 200-plus festivals and beer tasting that the company was involved in.  He was also quite friendly.  He told us all about the company from annual production (about 40,000 to 45,000 bbl) to the story behind the Undercover Shut-down Ale (when ABC officers busted an employee for “420” causing the plant to shutdown for a month four years ago).  He spoke of the owner Tony McGee who started brewing on his stove and selling beers from his car trunk.  To think that things evolved to where they are today is an actualization of the American dream.  Today Lagunitas employs 38 people who, on our tour, appeared to all be happy with their jobs.  Jacobs also gave us some insight into the products that might change or evolve in the future. “The Imperial Stout might go away and be replaced with a new, more robust one” he divulged.  He poured us some more of the dark brown and chocolaty Ruben.  The tan head and smooth deep flavors masked the bold alcohol.  Then he let us sample the Sonoma Farmhouse Ale, a copper bodied summery Belgian brew with a citrus and phenolic nose and a crisp, biscuit cinnamon floral finish.  It was very tasty to say the least. 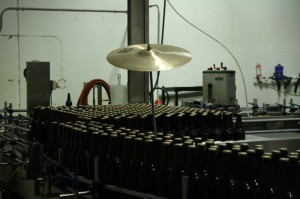 After  chatting it up with these nice men, Chartier took us on the tour of the brewer starting with the bottling line.  22-ouncers of the Ruben were being filled, labeled and packed for the first time as we looked up at a sign about the line where a Macho Man action figure loomed with the words “No Whining” appearing when the line turned it.  “Everybody takes pictures of this when they visit” a man said with a smile as we passed through.  The line will fill 3000 cases a day of this tasty brew.  Beside the line was a cymbal from a drum kit.  Another, ur, symbol of the spirit of this group who love to make beer and have fun doing it. 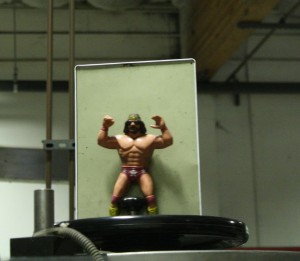 To the fermenters next.  Nine different fermenters each with different names.  Names like Moose, Pudge, Cartman, and Kaboom stood in place of the typical numbering system.  As we approached the new brewing set-up Cartier told us that the water was pretty drinkable in these parts.  “We built our own deionizer; we add just a touch of salt” he said.  The water here comes from the Russian River watershed, a scenic area we had viewed in part on our way down the coast from Fort Bragg to Boonville.  The new brew system replaced an old 30 vessel system than ran 24/7.  The old set-up was replaced in January and shipped to Ska Brewing in Durango, Colorado. The new system was phenomenal.  Under a skylight the working conditions here were nicer than in most warehouse breweries. “We’ve upped our production about 30% over the last three years” said Cartier as he took us to the hop cannon.  “Our head brewer is an Ebay junkie and found this one for us.”

We then met the man behind some of these wonderful recipes.  Jeremy Marshall, head brewer at Lagunitas appeared young for his position, but he is quite sharp and friendly.  When we met him, he had just kegged a special beer for the Holiday Ale Festival in Portland.  It was an extreme dry-hopped version of the Ruben with extra additions of chocolate nibs and white pepper.  He let us taste the bitter Peruvian nibs which were purchased from Mountain Herbs in Eugene, Oregon.  “Conditioning it will give it extra flavor” said Marshall. “French oak barrels with some organic Sri Lankin pepper will give it the extra touch.”  Very nice.  Then the brewer went to the cooler and returned with a bag of new high alpha hops that Lagunitas was working with called Bravo.  “This high alpha has its roots in Nugget and is similar to Columbia” he said as he opened the bag and thick rows of lupulin glared from the side of the packed buds.  “We are going to use this to dryhop an upcoming Zappa beer” he continued.  After sniffing hops and chewing on bitter chocolate, we had to hit the road.  We gave the kind folks a few bottles of beer we had brought from Portland including a BridgePort Hop Harvest and a Pelican Doryman Dark. They provided us with bottles of Ruben and Maximus Imperial IPA. We didn’t want to leave so soon, but this was our first beer stop of the day and the sun was already beginning to set.  We had to get back on the 101 and meet an old friend who was waiting for us at Moylans.  So we said goodbye to one of the coolest beer stops of all time and the kind folks who worked there.  We will definitely return one day.