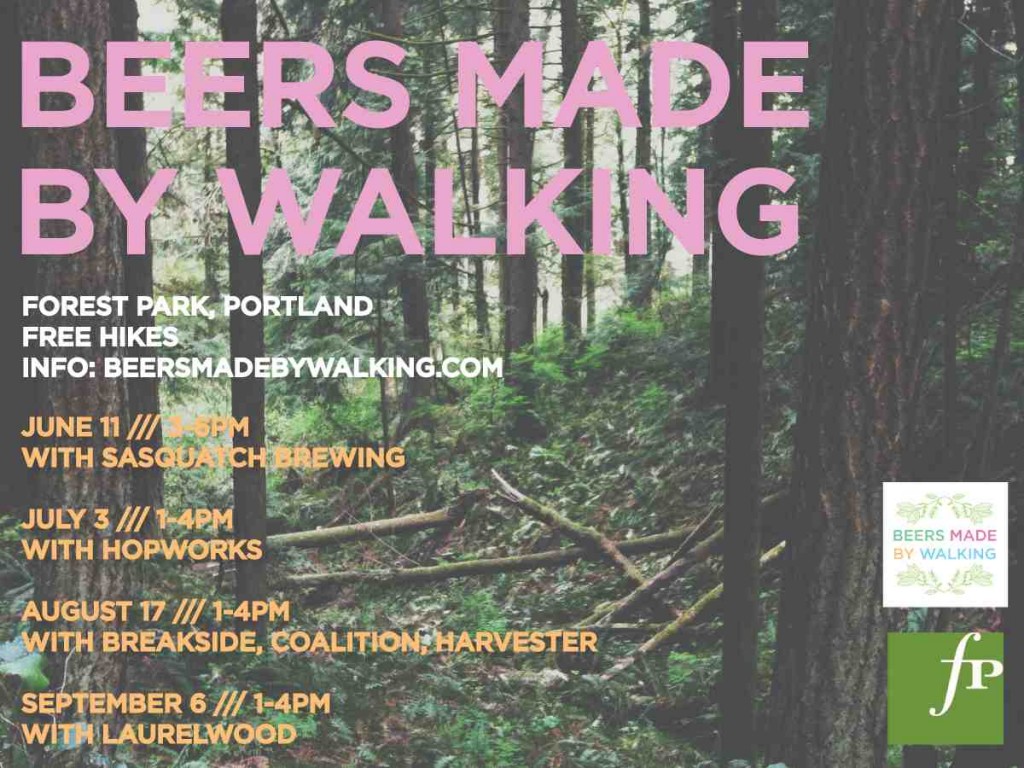 Today is the first hike of the season with Beers Made By Walking, the program that invites breweries to make new beer inspired by nature walks. This project started by Eric Steen during his days in Colorado returns to Portland’s very own Forest Park for 4 great summer hikes.

The hikes themselves are free, but registration is required. Tickets will become available approximately a week before each hike. You can follow the Facebook Event Page for Beers Made By Walking Hikes to receive updates about the program. Location and directions will be sent to registered guests.

This years hikes will feature Sasquatch brewery today, June 11th, Hopworks on July 3, Breakside, Coalition and Harvester on August 17th and wrapped up with Laurelwood and Burnside on September 6th. Listed below are more details for each hike.

June 11 – Newton to Waterline
This hike will showcase the the heart of Forest Park, where the forest transitions from its more frequently visited urban side to the quiet solitude of the north end of the park. Hikers will get to see the contrast between the impacts of invasive species and the remnants of mature Doug Fir forests that once covered the west hills.
When: Wednesday, June 11, 3:00 – 6:00 pm
Tickets: Available here
Brewery: Sasquatch Brewing

July 03 – Ancient Forest Preserve
Embark on a Beer Walk through the towering trees of Forest Park Conservancy’s Ancient Forest Preserve. This hike will focus on old growth forest characteristics, edible/medicinal plants, and how plants are used to make beer. Along the way, learn how wild yeast was harvested for brewing a unique beer for the Beers Made By Walking program.
When: Thursday, July 3rd, 1:00 pm – 4:00 pm
Where: A 20 minute drive from downtown Portland, north of Forest Park.
Tickets: Tickets will become available here on Thurs. June 26th.
Brewery: Hopworks Urban Brewery

August 17 – Cascade Views
A hike that showcases a variety of terrain in Forest Park, from open shrubland to cool creek valleys. Part of the Beers Made by Walking Program, this hike will focus on edible/medicinal plants and their application in beer making. Hikers will join brewers from three Portland breweries as they explore summer vegetation.
When: Sunday, August 17th, 1:00 – 4:00pm
Tickets: Tickets will become available here on Fri. August 8th.
What to Expect:
A view of Cascade mountain peaks (hopefully)
A 4 mile hike with 1400 ft elevation gain
Brewery: Breakside Brewery, Coalition Brewing, Harvester Brewing

About Forest Park Conservancy:
The Mission of the Forest Park Conservancy is to protect and foster the ecological health of Forest Park, maintain and enhance the park’s extensive trails network, and inspire community appreciation and future stewardship of this iconic urban forest as a gift for generations. The Conservancy fulfills this mission with a staff of seven full-time employees, several seasonal part-time conservation technicians, and more than 1,000 volunteers each year. We operate under a formal partnership agreement with the City of Portland Bureau of Parks & Recreation, the owner and manager of Forest Park.

About Beers Made By Walking:
Beers Made By Walking is a program that invites people to step outside and see the place they live in a new light. We invite brewers to take nature walks and make beer inspired by the plants identified on the trail. Since 2011, we have worked with over 45 breweries in Oregon, Colorado, and Washington. Our hiking and tasting events act as educational and fundraising programs for environmental organizations in the regions we serve.