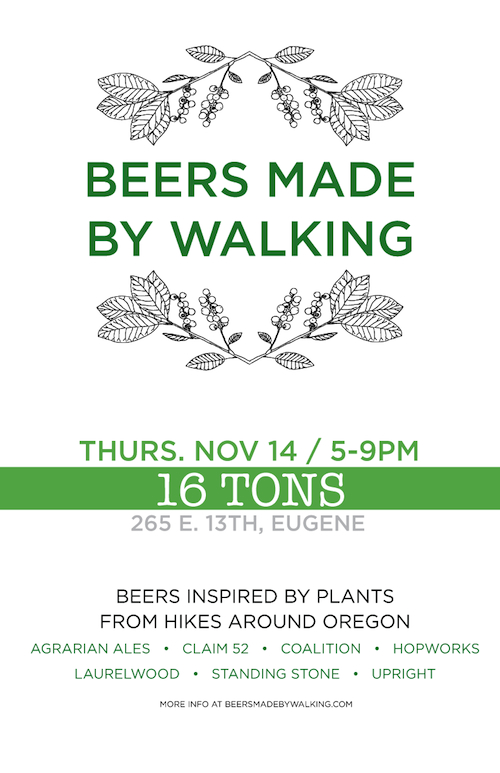 The ever growing Beers Made By Walking program will visit a new city for their next event on Thursday, November 14th. This time BMBW founder, Eric Steen, brings his small scale but large on flavor event to downtown Eugene’s 16 Tons Taphouse. This free event will take place from Noon until midnight.

Throughout the summer, nine breweries across the state of Oregon have participated in walks for the Beers Made By Walking program. The challenge to the brewers is to take a hike, identify edible and medicinal plants along the trail and use the plants as inspiration for a new brew. At least six of the nine beers will be available in Eugene on November 14th, at 16 Tons Taphouse. The beers will be on tap all day.

Each beer in this series is innovative in that they are drinkable landscape portraits of areas throughout Oregon. You’ll get to taste a portrait of the Pacific Crest Trail in Ashland, neighborhood trails in Eugene, the Wildwood Trail in Portland’s forest park, an urban neighborhood in Southeast Portland, among others.

So maybe you are still a bit curious about how this entire BMBW works. Steen wrote an interesting and informative recap regarding the process Eugene’s Claim 52 Brewing went about developing their beer for the event, Gose Coastal. This hike took Claim 52’s brewer, Joe Buppert, from Eugene to Florence in the coastal range during an unfavorable day of windy rain storms. This nasty weather did not deter this group from what it was in search of; the perfect mushrooms and huckleberries to put an Oregon spin on this old German style of beer called Gose.

BMBW is very happy to announce that this year, a part of the proceeds from the event will be donated to Nearby Nature, a local Eugene non-profit organization that is dedicated to fostering appreciation of nature nearby and providing tools for ecological living.

So make sure to walk on over to 16 Tons Taphouse on Thursday, November 14th to take in beers that were inspired on the trails of Western Oregon.

About Beers Made By Walking:
Beers Made By Walking is a program that invites brewers to make beer inspired by nature hikes and urban walks. The program began in Colorado Springs in 2011 with the hopes of inspiring others, through beer, to look at our local landscapes in fresh and community-minded ways. Since then it has expanded into multiple cities and states including Colorado, Oregon, and Washington. Please see beersmadebywalking.com for more information