Eight years ago Belmont Station took a chance and hosted and event that showcased beers that were a bit more sour than most. Since this time sour ales have gained in popularity, especially in the beer-centric crowd. The week long Puckerfest 8 is a celebration of sour, wild and funky beers and kicks off this Friday, July 11th and runs for one week. 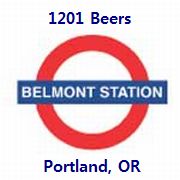 Belmont Station’s 8th annual celebration of sour beers will keep all of your mouths puckering. Every night of the week will feature a different brewery or two or three that will offer up their rarest sour beers to the Station. And for you non-sour beer fans, they’ll keep some more “normal” beers on tap. We all need a palate cleanser!

Throughout the week look for special tappings, beers blended just for this event and “Meet the Brewers” events. The week long festival will feature the following breweries each day:

Sunday, July 13 – Rev. Nat’s Cider + Russian River
Rev. Nat West will be on hand from 2:00 to 4:00pm to tap a cask of his newest sour creation called The Passion, made with passion fruit juice. Rev. Nat blended this with a touch of Sacrilege Sour Cherry just for Puckerfest. Russian River will be offering up 2009 & 2010 Supplication, and 2009 & 2010 Temptation.

Thursday, July 17 – Trinity + Upright
Colorado Spring’s Trinity Brewing is putting together a horizontal tasting of all 6 Swingline interpretations. Upright Brewing is bringing the ever popular Blend Love, Jeux d’eau, Fantasia, and Lactovasilios. Belmont Station will also be pouring upwards 20 sour and wild ales in the biercafe as they Pucker Up for the last night of Puckerfest!

The Biercafé is open from noon to 11pm every day and The Italian Market is open from Noon to 9pm daily. In order to facilitate more efficient service for all our guests, the Biercafé will be CASH ONLY for the duration of Puckerfest. There is an on site ATM and bottles to go may be purchased with credit or debit cards on the bottle shop side.