On Sunday January 10, 2010, Upright Brewing will be unveiling their latest in a series of limited bottling releases. This time it is a highly anticipated traditional old ale known as “Billy the Mountain.” For the relatively new brewery it is batch number one. Billy was brewed in March 2009 and has matured in PinotNoir barrels along with with a special strain of Brettanomyces yeast (Claussenii). According to Upright founder Alex Ganum, only 50 cases will be available. Since a cease and de

sist order was placed on Lagunita’sPetaluma, California, who featured a series of beers named for Frank Zappa albums and depicting their artwork, Upright remains the only Zappa-inspired beer on tap anywhere. The label for Ganum’s brew, like his others, was designed by Ezra “Samurai Artist” Johnson-Greenough. Says Ganum “We just brewed the second batch last week and will likely have it ready sometime next year.” Brewing of 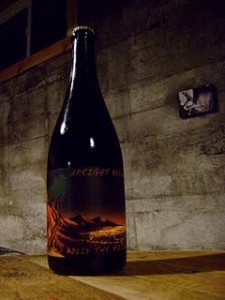 In addition to this bold barrel-aged old ale, Upright is also releasing their German-inspired Gosebier. Folks who attended Brewpublic’s Portland Brewers Gose Tasting at Victory in December were able to get a sneak taste of this wonderfully unique beer. Gose is an unusual German style of beer brewed with 50% malted wheat and is slightly soured. The Gose also makes use of coriander and salt to provide a distinctly quenching light alcohol (around 4 or 5% ABV)referesher. For more on Gosebiers, check out an earlier post here.

The release will be during Upright’s normal tasting room hours that day of 1-6 pm. Charcuterie tailored to the two beers will beprovided along with some bread for snacking.

I spoke with Ganum about some of his recent brewing creations.

“We should be doing an oyster stout with Jason McAdam in a few weeks and Gerritt (Ill)and I brewed our Congo Pale Ale last week, which is essentially an IPA recipe but fermented with the house (saison) yeast.” Other recent creations by Upright this winter include the Holy Herb, a brown farmhouse ale brewed with hyssop and aged on eucalyptus wood. “It has a crazy nose full of eucalyptus but the flavor is much more tame, kind of malty fruity and herby. It’s inspired by the Fantome Strange Ghost. and debuted at the Holiday Ale Fest.” 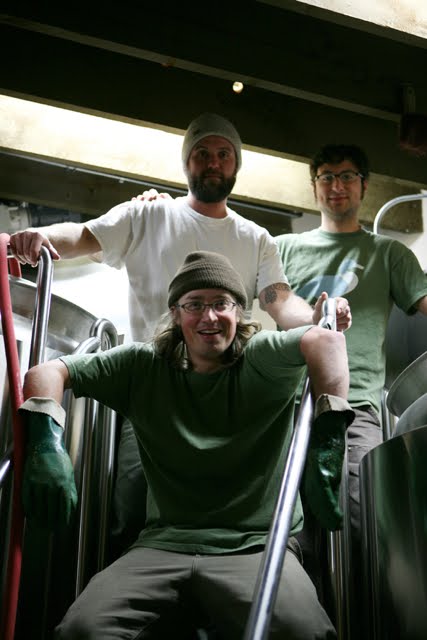 “Gose was a single batch we made that was almost entirely bottled…we filled three kegs” says Ganum. “I got the idea to brew it after tasting Cascade’s version earlier this year and remembering how much I loved a homebrewed one I tasted in a competition years ago.” He adds “We decided to use the house French saison strain because it has a bit of tartness to it naturally but also employed a sour mash like we do on the Four and added a pinch of lactic acid to acidify the water a bit further. It ended up quite dry and hit 5.2% ABV. I think the mix of dryness, acidity and saltiness makes it easy and enjoyable to drink plenty of – our kind of beer.”

We look forward to experiencing more of Upright’s imaginative and flavorful creations. Keep up the good work, fellas!

“You can’t be a real country unless you have a beer and an airline – it helps if you have some kind of a football team, or some nuclear weapons, but at the very least you need a beer.”  -Frank Zappa