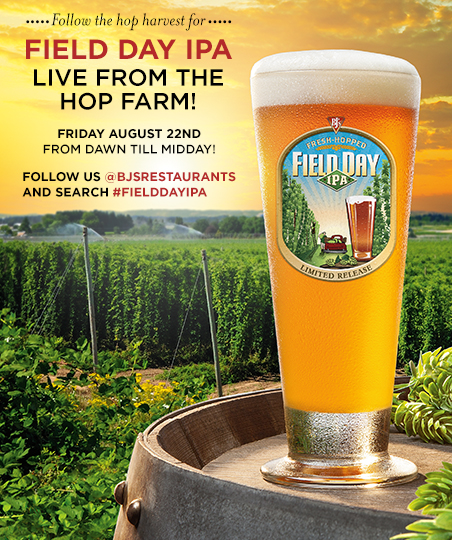 The beloved hop fields of the Willamette Valley are now beginning to be harvested. As these hops are harvested from the bines this means one thing, Fresh Hop beers are soon on their way.

On Friday, August 22nd, BJ’s Restaurant & Brewhouse will be making a pilgrimage to harvest some hops at Crosby Hop Farm in Woodburn, OR. Once harvested, these wet hops will make their way back from the fields to the fermenters at BJ’s production brewery in Reno, NV to make Field Day IPA.

Then on Tuesday, September 2nd, BJ’s Field Day IPA will be released at all of their locations including our nearby Jantzen Beach and Hillsboro locations.

Field Day IPA is described ,”a wet hopped IPA, so the harvest of the hops is a real event as we quickly shoot the hops from the fields to the fermenters at our Reno Brewery within hours of picking. The result of the hop harvest and quick action to brew with those wet hops is an unusually and brilliantly fresh tasting IPA. Needless to say, we are very excited about this year’s batch!”

BJ’s social media coordinator, Johnny Newnes, will be at the hop harvest this Friday, August 22nd from dawn until midday. Newnes will be live Tweeting and Instagramming updates from Crosby Hop Farm on what is taking place at the hop harvest. Make sure to follow them to keep tabs on their harvest.

Just make sure to mark your calendars to sample the final wet hopped beer, Field Day IPA, at BJ’s beginning on September 2nd.