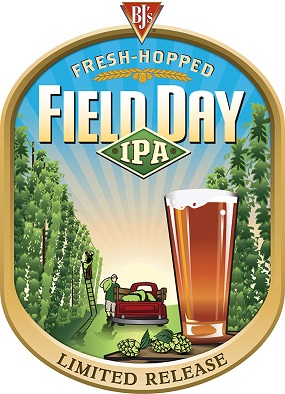 With all of the chatter about fresh hop beers currently being released, BJ’s Restaurant & Brewhouse just sent us a well produced video of their experience a few weeks back at Crosby Hop Farms in Woodburn, Oregon. Today, BJ’s will be releasing their Fresh Hop Field Day IPA™ at all of their locations.

Back on Friday August 22nd, the BJ’s Brew team lead by Alex Puchner, headed out to the Crosby Hop Farm in Woodburn to harvest Centennial hops for their seasonal, Fresh Hop Field Day IPA™. During their visit to Oregon they had a truly spectacular harvest. They worked from before the sunrise ‘til mid-afternoon, effectively harvesting all the hops they needed and quickly sent them to their production brewery in Reno, Nevada to be added to this year’s fresh hop batch of Field Day IPA™.

Puchner teamed up with Brian Crosby and Blake Crosby at Crosby Hop Farm to acquire their fresh-picked Centennial hops for the quality and reliability of their hops. After 5 generations of hop farming, the Crosby family sure knows what it takes to grow premium hops. The Centennial variety generally ripens earlier than most other hops so it is one of the first varieties to be harvested and used for fresh hop beers. The aroma profile is of floral and citrus notes.

Fresh Hop Field Day IPA™ will be tapped today, Tuesday, September 9th, at your local BJ’s Restaurant & Brewhouse. This includes our local Oregon locations in Jantzen Beach in Portland, Hillsboro and Eugene along with the Seattle area locations in Puyallup, Redmond, Tukwila and Tacoma. Make sure to get it while its fresh!

Check out the video below to see how Puchner and his crew overlooked the hop picking that took place at Crosby Hop Farm a few weeks ago.

If you’d like to win a BJ’s Restaurant & Brewhouse gift card please comment and we will put your name in a hat and draw a winner. Yes, its that easy!