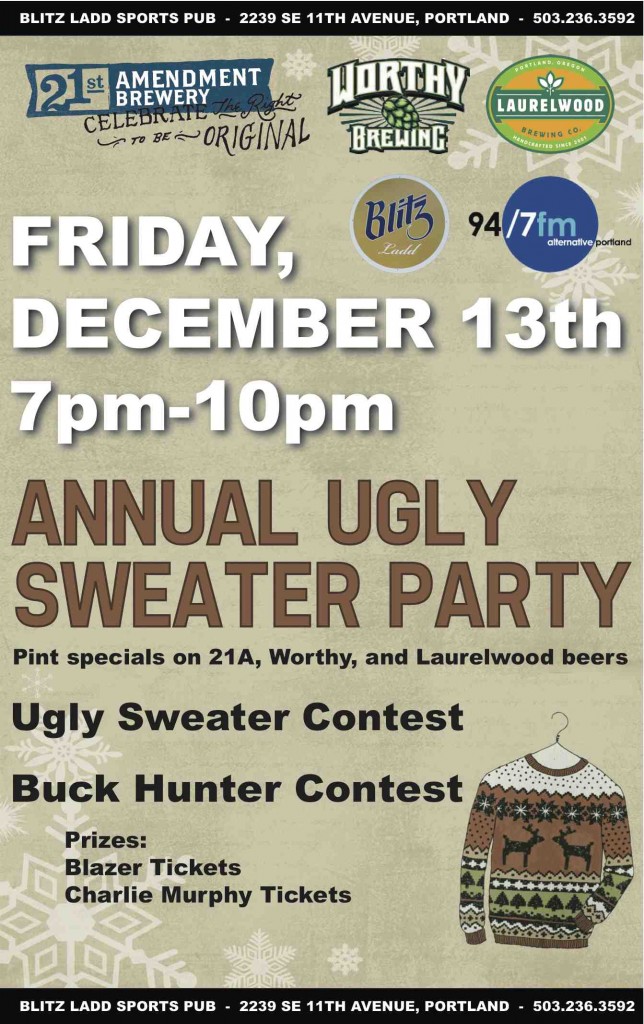 Portland’s Laurelwood Brewing is teaming up with Bend’s Worthy Brewing and San Francisco’s 21st Amendment Brewery to bring you their Annual Ugly Sweater Party. Taking place at Blitz Ladd on Friday, December 13th from 7 to 10pm, this event will offer many ways for you to win some sweet prizes and show off your classy holiday sweater.

Blitz will be hosting an Ugly Sweater contest with the grand prize of Portland Trail Blazer tickets. Not too shabby of a prize. Now to just find that bad holiday sweater.

But wait there’s more, they’ll also be offering up a Buck Hunter contest. Make sure to find your shooting glasses to get your best chance at becoming a winner of a $100 Blitz Ladd gift certificate. Other prizes throughout the night include Charlie Murphy tickets, brewery swag and giveaways from 94/7. There will also be live music from Miss Massive Snowflake. Don’t be scared since its Friday the 13th and make your way to Southeast Portland’s Blitz Ladd for a great night of beer and entertainment!

To learn more about the latest happenings at Laurelwood Brewing check out their December Beer News below featuring Micah Bell and Vasili Gletsos.