Reluctant to leave the friendly and flavorful environment of Lagunitas, my phone rang, and I had to run.  An old friend Erik was on the line.  He had hopped a bus up from San Francisco to meet us at Moylans Brewpub in Novato.  So, we bid adieu to our new friends at Lagunitas and drove south on the 101 about 15 miles into more urban sprawl that surrounds San Francisco.  We arrived in Novato shortly after rush hour traffic was about to take hold. From afar we could see the giant grain silos with the Moylans insignia and were quite satisfied.  This was a stop on our journey that I really wanted to visit.  Afterall, Moylans brewmaster Denise Jones makes some of my favorite beers and now we were to enjoy them at the source on tap.

Inside, Moylans appeared to be much like other stereotypical chain establishments such as Rock Bottom, BJs, or Old Chicagos.  The lofty factory building possessed a casual atmosphere with big windows exposing the brewery and a very long wooden bar where locals, many with brew sweatshirts and hats sat sipping a refresher.  The beer menu on the wall behind the bar was quite large.  Most of these beers on tap were also available back in Oregon in bottles, but I suppose one hasn’t truly lived until he’s enjoyed a Hopsickle on tap.

The Hopsickle Triple IPA is one of the richest hop monsters I’ve ever taken pleasure in tasting.  At 9.2% ABV, waves of Centennial, Cascade, and Tomahawk hops blanket and errode the tongue with high alpha delight.  It’s glowing amber-orange body and thick off-white head unveil a floral piny and grapefruity presence to cotorize any hop heads palate with a nice lashing.  Further, it is surprisingly smooth for such a mammoth beast. Oh, and it won a gold medal in the imperial/double IPA category at the 2007 GABF. Not too shabby.

Dragoon’s Irish Dry Stout: This 2007 GABF gold medal winner is the perfect balance of dry chocolaty goodness and robust creaminess. At 5% ABV, this easy drinking stout is good to go just about any time of year.  Trying it on the nitro tap was even better.  A cascading, milky body with a big thick head…holy crap!  What a beer!

White Christmas Winter Lager: Mentioned earlier in Brewpublic’s must have seasonal releases, this crisp, spiced bold lager is nutmeg-laden with other mouthwatering spices including nutmeg and orange peel.  Perfect for the (sort of) chili Novato nights, or whereever you enjoy great beer.

Pomegranite Wheat Ale: A special offering on the brewpub tap list.  With a bright honey-rubied body and a sweet honey and biscuity juicy snap, this is the perfect beer for beer drinkers who don’t like beer that tastes like beer.  Still, it packs enough malt and natural pomegranite presence to quench any thirst. 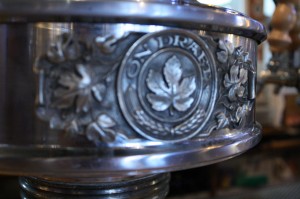 As the sun set on Marin County, we knew we’d not have time to make it to both of our last stops north of San Francisco.  We had to choose between Marin Brewing of Larkspur and Iron Springs Pub and Brewery of Fairfax.  We opted for Iron Springs since Marin was owned by the same folks at Moylans, and we had already had much of their beers.  So, as darkness approached and traffic thickened, we set off eastward for a taste of the 2008 World Beer Cup gold medal winning Sless’ Oatmeal Stout and more…