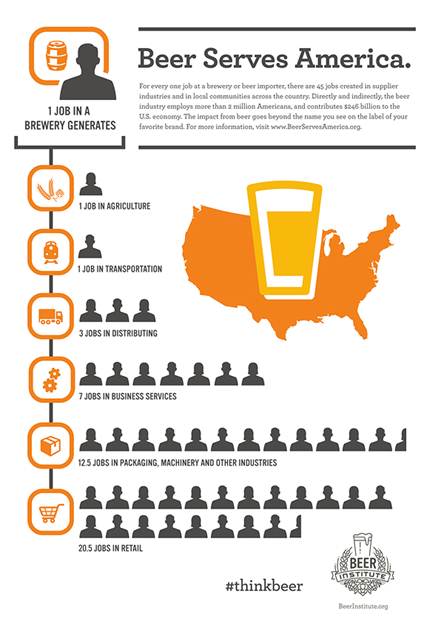 With us heading into Labor Day weekend here is some strong, positive news about how the brewing industry supports our American economy. New analysis from the Beer Institute reveals that each brewery job helps support and additional 45 jobs in other industries. Lets raise a glass to these 2 million American workers!

Here is more from the Beer Institute’s press release.

WASHINGTON, DC — This Labor Day, a new analysis and infographic from the Beer Institute demonstrates how one job inside a brewery supports another 45 jobs outside.  From farmers to factory workers, and truck drivers to tavern owners, beer puts people to work.

“Today we toast to the industry’s 2 million men and women who make it possible for Americans to enjoy their favorite beer,” said Jim McGreevy, Beer Institute President and CEO. “America’s preference for beer is a huge boon to the national economy and the American worker.”

According to an economic study jointly commissioned by the Beer Institute and the National Beer Wholesalers Association in 2012, U.S. brewers and beer importers are the foundation for an industry that employs more than 2 million Americans, directly and indirectly. Beer also contributed $246.6 billion to America’s economy and generated $49 billion in local, state and federal taxes.

A Beer Institute analysis showed that each job in a brewery supports other jobs in the agriculture, business and personal services, construction, finance insurance and real estate, manufacturing, retail, transportation and communication, travel and entertainment and wholesale sectors.

“Most consumers are surprised to learn that, on a national average, taxes are the most expensive ingredient in their beer,” said McGreevy. “The BEER Act would protect consumers from a hidden and outdated tax and encourage expansion and growth in an American industry that puts millions of men and women to work.”

Linked here is a state ranking of total jobs supported by beer. For more information about the economic impact of beer in the U.S., including state and Congressional district data, please visit www.BeerServesAmerica.org.