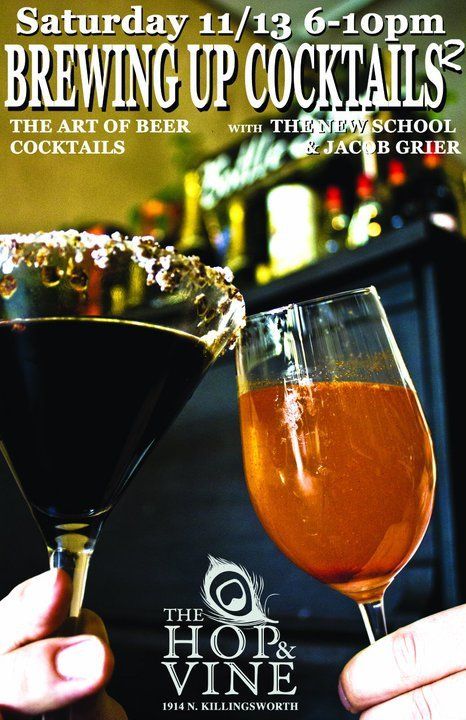 Mixologists and writers Jacob Grier of Liquidity Preference and Ezra Johnson-Greenough of The New School have re-teamed with co-conspirator Yetta Vorobik owner of the great cocktail, wine and beer bar The Hop & Vine for the second installment of Brewing up Cocktails a spirited event exploring craft beers as interesting and relatively unexplored ingredient for combining with spirits to create something truly unique.

Last July’s successful Brewing up Cocktails 1 as part of Oregon Craft Beer Month introduced craft beer lovers to the world of cocktails and spirits and Brewing up Cocktails 2 aims to go even further with a more Fall themed drink list offerings like the Hot Scotchy, one of the original beer cocktails nearly forgotten because of the extremely short and selective window that one can prepare it with its use of fresh hot first runnings of un-fermented beer wort, or the revival of a German classic with a NW twist the Wassail also served heated is a stewed concoction featuring Deschutes Brewery’s favorite winter warmer Jubelale stewed with roasted apples, rye whiskey, sherry and spices. For those in the mood for something colder or lighter there are four more cocktails with a wide variety of flavors.

Brewing up Cocktails is Saturday November 13th at The Hop & Vine 6-10pm and open to the public, drinks individually priced.

Jacob Grier is a freelance writer, barista, mixologist, and magician in Portland, OR. He writes, eats, and drinks a lot. His articles have appeared in The Washington Post, Reason Online, The Oregonian, and other publications.

Ezra Johnson-Greenough is a brewer, writer, artist and general conceptual creative designer of all things artistic from music, to events and drinks.

Yetta Vorobik is the proprietor of The Hop & Vine with a longtime passion for wine and spirits and a recently discovered love of craft beer that has made The H & V a must visit for beer geeks.

“The Hop & Vine balances a love of beer, wine, cocktails and food, plus a well-chosen bottle selection for there or to go. Few other beer bars offer the options of The Hop & Vine, which makes it stand out, as far as I am concerned. Couple that with their art gallery and beautiful backyard garden patio, and owner Yetta Vorobik has built one of the best and most up-and-coming hangout spots in Portland.”

Hot Scotchy
Described in the bible of homebrewers by Charlie Papazian: The Joy of Homebrewing as a drink made from the piping hot first runnings of wort (unfermented beer) as it leaves the boil kettle on its way to the fermenter. At this point in the process the wort is a hot sweet, malty and hoppy nectar that you can clearly taste every ingredient in. A brewer would simply fill a pint with the elixir and drop in a shot of Scotch (or whatever grain based alcohol was handy). Adding its own twist Brewing up Cocktails will serve the wort steam heated from Upright Brewing’s Five a farmhouse pale ale and topped with a dollop of housemade cream.

One of the classic cider drinks is a Stone Fence, a concoction of rum and hard cider. According to legend, it was this drink that gave Ethan Allen and the Green Mountain Boys the courage they needed to storm Fort Ticonderoga. Our version combines Samuel Smith’s Organic Apple Cider with the funky, pot-stilled Smith and Cross Jamaican rum and spice notes from J. Witty Chamomile Liqueur.

Lovers Quarrel
When the original beer conceived for this cocktail became unavailable organizers were left with a conundrum, what to replace it with? Glancing at Hop & Vine’s taplist an altogether different but interesting beer offered an exciting new challenge. Dexter, Michigan’s Jolly Pumpkin Brewing makes barrel aged belgian and farmhouse style beers all with a tart and funky quality from the brewers use of wild yeasts and barrel aging. Luciernaga “The Firefly” is a beer described by the brewery as: “An artisan pale ale brewed in the Grand Cru tradition. Enjoy its golden effervescence and gentle hop aroma. Coriander and Grains of Paradise round out the spicy palate, melting o so softly into a silken finish of hoppiness and bliss!”

Combined with Gin and St. Germaine with a pinch of Cayenne powder yields a beautiful drink with a fruity yet dry citric tartness that gives way to the spiciness of pepper and chiles. The tart acidicness combined with the heat balance each other out for a thirst-quenching cocktail.

Based on the classic German mulled cocktail our version adds a bit of NW classic winter beer flair with the fan favorite Jubel Ale from Deschutes Brewing. Heated in a pot with caramelized roasted apples, cinnamon sticks, nutmeg and for the booze a healthy dose of whiskey and a bit of dry sherry. After stewing for a bit and letting the ingredients meld it is served hot with a a lemon ring on top.
This drink is sure to warm even the most jaded of beer and cocktail skeptics.

Named in honor of the original jokingly named beer cocktail from Brewing up Cocktails 1 that used a different version of the same oak-aged beer as this.

Son of the Furburger started with the simple and obvious idea of combining Bourbon, Smoked Bacon and of course Maple Syrup for what we thought was a sure thing favorite beer cocktail. But upon trying the cocktail out with various porters and stouts none of them would hold up and the drink alternately tasted watered down or just bitter. We realized we needed a bigger, bolder and richer beer that would accentuate the flavors of maple and smoke and so we went back to our standby from the original Furburger the Oak Aged Yeti Imperial Stout from Great Divide Brewing
Finally the martini is rimmed with a mix of powdered sugar and ground pepper bacon bits.

which has a great creamy moderately heavy mouthfeel, soft chocolate and smoke from the roasted malts and vanilla flavors from oak aging and just a bit of sweetness.

Jacob Grier has a soft spot for the Irish Car Bomb.

“Sure, it’s got a politically incorrect name, it’s messy, it curdles if you don’t drink it fast enough, and it requires chugging a half-pint of Guinness, but it’s also tasty and fun.”

Even so he was not about to put it on the menu at Carlyle, where he was the bar manager at the time he dreamed up his new version using a handmade beer foam that he dubbed the Defusion.

“I came across beer foam while flipping through the Alinea cookbook, which describes an ale foam in one of its dishes. This immediately gave me the idea for the drink. Achatz’ foam technique wouldn’t work for me though. It’s fine for the coursed service at Alinea, but behind the bar I needed something I could prepare in advance and keep stable throughout the night.”

Instead of Guinness our version for Brewing up Cocktails 2 will use Eugene, OR’s Ninkasi Brewing’s Oatis: A rich complex Oatmeal Stout with just enough hops to balance the copious quantities of dark roasted malts, and the addition of oatmeal for a creamy smooth drinkability.
The Hop & Vine is located at 1914 North Killingsworth Street in Portland, Oregon. For more information, call (503) 954-3322.
Tags:The Hop & Vine