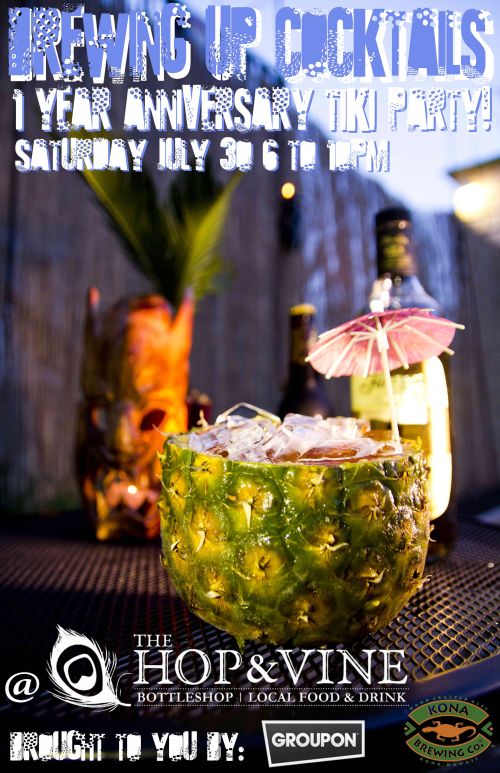 It has been just One Year since Ezra Johnson-Greenough, Jacob Grier and Yetta Vorobik founded Brewing up Cocktails with the intent of exploring the gray areas and overlap of the craft spirits and craft beer scenes both of which Portland, OR is known for. Since the first experimental event as part of last years Oregon Craft Beer Month at The Hop & Vine the beer cocktails movement has exploded into a full blown nationwide trend attracting the attention of everyone from NBC News to The New York Times and local publications like Imbibe Magazine and Portland Monthly. Spearheading the movement the Brewing up Cocktails crew has put on seven different events across the west coast including one internationally in Vancouver, BC in just the last 12 months and this July 30th along with sponsors Kona Brewing and Groupon present the eighth installment with a summer Tiki Party theme at the original location Yetta Vorobik’s The Hop & Vine.

This Saturday July 30th join us for a full on Luau and Pig Roast complete with a thatched outdoor Tiki bar, tiki torch’s and more at the infamous bamboo’d garden patio of one of North Portland’s highest rated bars The Hop & Vine known for its combination of Beer, Food, Spirits, Wine and even it’s own Bottleshop. Teaming up with Kailua Hawaii based Kona Brewing known for their refreshing tropical craft beers and the deals giant startup with a love of Portland’s craft beer passionate culture Groupon. No cover charge for this event with drinks individually priced.

About Brewing up Cocktails
Founded by Ezra Johnson-Greenough, a brewer, writer, artist and event coordinator, Brewing Up Cocktails started as a one-time event for Oregon Craft Beer Month in July 2010 and has turned into something much larger. Johnson-Greenough asked hot local bartender/mixologist and writer Jacob Grier to collaborate with him in crafting some unique beer cocktails in the hope of proving that craft beers can be as good in mixed drinks as they are on their own. The venue they chose had to have great beer and an outstanding selection of fine spirits, and that is where partner Yetta Vorobik’s property, North Portland hotspot The Hop & Vine, came in. In addition to a great location for events, Vorobik adds her creative spirit and an adventurous third palate to the mix.
The July 2010 event was met with great interest, but it was not until the partners decided to do a follow-up event in the fall that the critics and public started to catch on. Beervana described one of Brewing Up Cocktails’ signature drinks, the Hot Scotchy, as:

“The Greatest Beverage in the World”

“Straight-ahead beer fan that I am, I have to agree that beer cocktails open up a brave new world.”

“A merger of Portland’s craft beer and quality cocktail cultures could push the next evolution of our increasingly sophisticated drinking scene.”

And finally the Associated Press caught on, with a story carried internationally, including on ABC News.