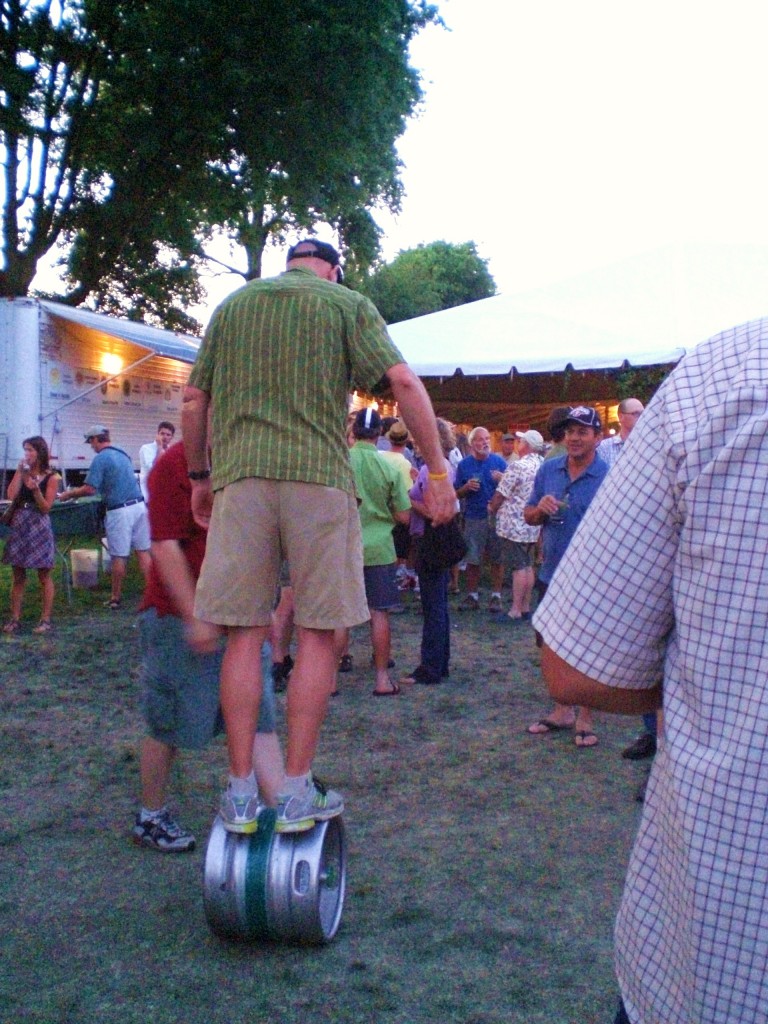 I recently realized I had been putting off my contributions to Brewpublic for quite some time. I guess we must be smack dab in the heart of “beer season” in Oregon, the time where no brewer in the state has time for anything other than tending the kettle and purging vessels.  In fact we ARE smack dab in the middle of Oregon Craft Beer Month, where you can’t swing a stick without hitting some out-of -this-world beer event. Because of that, I was going to tell you about all the upcoming events outside of Portland (yes, there are several events, Portlanders, believe me), but I realized everything going on this month gets great press/hype/reviews by the many great beer media outlets, including Brewpublic.  Even mainstream television and radio are starting to get it right. So, then I thought I’d give you some insight into the “growth and expansion” in Eugene. But we all know about our friends at Ninkasi and the huge addition and tank upgrades they installed and you may have heard that we keep adding new equipment, are getting more automated, and can’t keep beer in stock.  You may not have known, however,  about Hop Valley (out of Springfield, but they’re on the border, so we count ’em) purchased a double sized fermenter and had to install it outside the building due  to its height. Yes, beer sales are good in the Eugene/Springfield Metro region. But I won’t bore you with the details.  Instead, I’m going to turn it around to you, loyal readers, to give me some feedback from a beer festival attendee’s perspective (or even a brewer’s perspective if we have any reading. Or perhaps a festival organizer or owner-I know you’re out there somewhere Chris 🙂 ) So as we slide into Portland International Beer Fest weekend, followed by OBF,  the question of the day is: What do you think about the way most beer festivals are carried out in Oregon??

[Author’s note: The following dialogue is in no way meant to be a critique of any particular beer fests in any state, nor is it meant to slam the OLCC or any other regulating agency. It is merely intended to present the information and any opinions are entirely my own. Generalizations and assumptions will be made and all the facts have
NOT been researched. Prepare for that]

First off, I am fully aware that OLCC regulations make certain aspects of festivals a large hurdle. Every state has their own level of difficulty in pulling off an event. Many of my concerns with Oregon beer festivals are likely the result of OLCC regulations. And some  rules really are grounded in sound reasoning and common sense. Some. That being said, here goes:

For those that know me or have heard about my history, I arrived from Chicagoland last Spring where I had been a brewer for eight years. Most festivals in the Midwest (and I might argue other regions as well) are very different from those in Oregon. Most of the time the brewers did much of the legwork. If not, it was a homebrew club, or beer appreciation club, or even a brewpub or bar that organized the festival. Every so often you’d take part in a fest that was owned and run by a person who puts on beer festivals.  Since the brewer often did the legwork, they would have to bring there own jockey box to pour the beer and often donate the beer and chalk it up to marketing. Many festivals also did not have tokens or tickets for beers. Many were an unlimited sampling fest, or if there were tickets and tokens, they may not have been enforced well and it was essentially a unlimited fest. So, you can see the above bodes well for the festival attendee.  The brewer on the other hand often did not get paid for the beer AND had to work the booth (in which they could drink and talk/promote-HUGE plus in my book).  This did allow the brewery to do a better job of promoting their beers and making relationships with the customer, something that is difficult in a lot of Oregon Festivals. And what of the over consumption?? Well, it wasn’t really a problem-much. And that was due to the fact that many fest are one day affairs. 4-6 hours at best and then you went home.  In Oregon, many run three and four days, for ten hours per day.  That’s a lot of hours to drink a lot of beers. This then probably bodes well for the festival organizers. Less “rushing to try all of the beers” syndrome. Folks in Portland, or visitors for the weekend can come and go. This is a definite plus for trying a lot of beers and still maintaining control.

Okay, this synopsis is all over the board. Don’t you love people who try to “guest write” at respectable beer media outlets who really should just stick to their day job?? Let me bring some organization to my thoughts:

Positves for Brewer in Midwest (for example):
Interact from behind the booth with the customer WHILE drinking great beer.Given free reign of the fest because beer was donated.
Quick fest. One and done.

Negatives for Brewer in the Midwest for Example:
Do not get paid for beer.
Have to work all day at booth or get own volunteers.
Have to hurry to try many beers.

Positives for Brewer in Oregon
Not forced to work booth.
Kegs are purchased.
Organizers have many years of fest experience means a smooth running event.

Negatives for Brewer in Oregon
Some free sampling, but limited.
Can’t get behind booth to promote beers(space lacking).
Brewery reps can spend a whole weekend “supporting” festival. 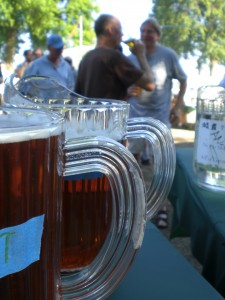 Positives for Fest Goer in Oregon
Multi day event equals a lot of beer
Many more festivals in concentrated locations.
Often other options at fest besides beer

So there’s a little synopsis of what I think when looking at the differences in the beer festivals I was used to in the first 8 years of my brewing career and what is happening here in Oregon.  There are certainly some great fest happening in Portland and beyond these days, and I have nothing but respect for the men and women who do all the legwork in making these huge fests happen. However, if you ever feel like experiencing a 6000 person festival on a sunny Wisconsin lake shore in August, where 100 brewers from all over the Midwest bring 3-5 beers, most of which are very rare and special, and pay roughly $40 for all the tasters you can handle in five hours, then you should try to get to Madison, Wisconsin for the Great Taste of the Midwest. This is hands down the best beer fest I know of. Good luck getting tickets though. They sell out in less than an hour. 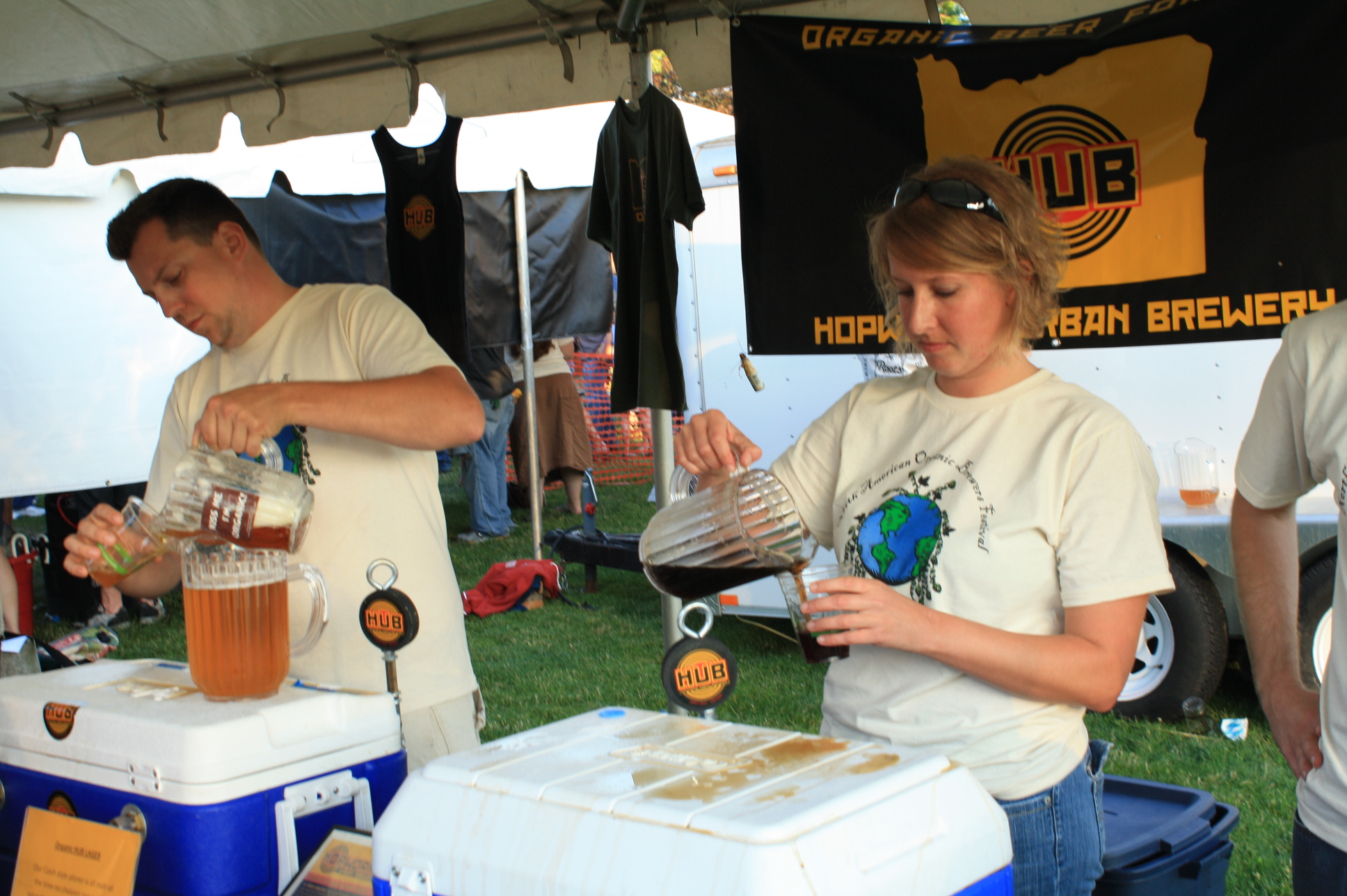 But what I really want to know is, what do YOU think about the festivals you attend here in Oregon. Big or Little. Annual or periodically. Profitable or charitable. What do you like and dislike. Which ones do you attend? Why? Even if you have no “other region” experience, I’d like to hear your opinion. Don’t just slam, though. How about some improvements? Do you attend other events in other states? Why? Is there anything a brewer can do to make it better for the fest goer? Are there other types of beer festivals you’d like to see put on? The stage is yours….Thanks in advance for your thoughts.