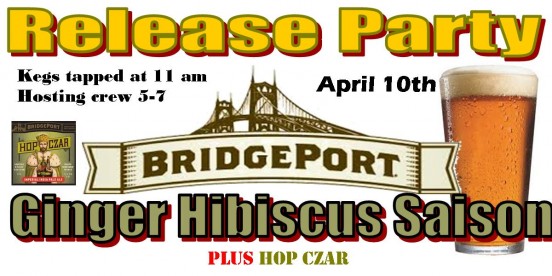 As BridgePort celebrates 30 strong years in brewing and the title of being Oregon’s oldest craft brewery they continue to experiment with flavors. This is evident with their latest limited release in the Mettle & Mash series of beer, Hibiscus Ginger Saison.

Hibiscus Ginger Saison is the third beer to be released in the Mettle & Mash series. This latest release could be considered a “brewer’s whim” kind of beer. Inspired by the curiosity of hibiscus infused tea, HGS offers a fruity and flavorful character. Below are more details on the brewer’s tasting notes.

Tonight, Thursday April 10, Concordia Ale House will be hosting a release party for Hibiscus Ginger Saison from 5 – 7 p.m. Swing on by during this time to meet up with the BridgePort crew and learn more about their Mettle & Mash Series of beers.